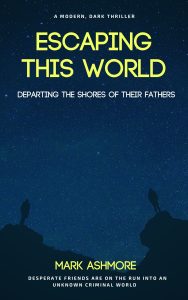 Instead of going home directly after a tough week at work, Giles Greenwood and his brother Michael arrive at their favourite pub with their friends Phillip and Francis. Unbeknownst to them, two crime gangs planned to meet at that location to conclude an illicit transaction involving international terrorism plans. Phillip is fatally shot during a brawl that accidentally consumes all the gathered groups. The two criminal gangs quickly disperse, leaving Giles wrongfully implicated in Phillip’s murder.

The companions now learn the world’s hard truths and must rely upon each other only. They steer towards Brazil, deeper into a perilous criminal underworld of dark conspiracy which they are unprepared for. A broader international conflagration is about to begin due to their pursuit. A shadowy Illuminati-like organisation is revealed at the centre of all matters as Giles, Michael, and Francis have unknowingly become active players in a more expansive and dangerous struggle by the world’s dark forces.

Born in Canada, Mark now lives in London, UK. Mark is currently working on books four and five of the series.

Mark lists his literary influences as:

1) The Duel: The Story of Sergei and Maria-Due July 2023
2) Vasily: Prequel to Escaping This World-The story of Vasily (Part 2)