You are here: Home / New Books / Fall of the Cities: Branching Out 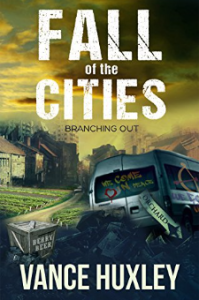 About Fall of the Cities: Branching Out

Three years and hundreds of bullets later, Orchard Close is holding together. The cabal dreams up more ways to get their latest group of requirements: gardeners and women of loose morals. Food production is a major concern, for the marts and for the enclaves. Caddi pushes Harold with his new games, taunting, testing and trying to figure out what makes him tick – so he can exploit it.

A common enemy, The General, smashes smaller enclaves, combines gangs and makes a wide sweep for control of the city, aligning the GOFS, Barbies and Orchard Close for their biggest fight yet. In this new world, only the strategic survive, but can they survive their temporary alliances?

Vance Huxley lives out in the countryside in Lincolnshire, England. He has spent a busy life working in many different fields – including the building and rail industries, as a workshop manager, trouble-shooter for an engineering firm, accountancy, cafe proprietor, and graphic artist. He also spent time in other jobs, and is proud of never being dismissed, and only once made redundant.

Eventually he found his Noeline, but unfortunately she died much too young. To help with the aftermath, Vance tried writing though without any real structure. As an editor and beta readers explained the difference between words and books, he tried again.

Now he tries to type as often as possible in spite of the assistance of his cats, since his legs no longer work well enough to allow anything more strenuous. An avid reader of sci-fi, fantasy and adventure novels, his writing tends towards those genres.