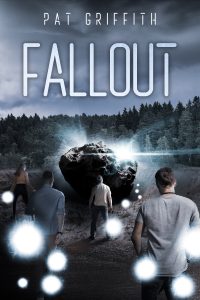 The greatest threat lies within . . .

​Brendan Carlisle dreams a lot—strange, vivid dreams that seem almost like prophetic visions. Dreams that have a funny way of coming true.

But when Brendan and his friends embark on a mountain camping trip, he quickly finds himself at the center of a maelstrom he never saw coming. It begins with a harmless night of watching shooting stars. After they find fragments of a freshly fallen meteorite, though, something goes wrong.

Brendan has lost control of his physical body. Something else is controlling his actions, something lurking at the edges of his conscious mind. And he is not alone. His friends all feel the same. Their lives are no longer their own.

Pursued by FBI agents with their own interest in the meteorite, Brendan and his friends struggle to regain control from the alien entities that now possess them. But how can you fight back when your own body betrays you? And what do the entities seek to gain from his special ability?

All Brendan wants is to go home, to be with his friends, for life to go back to normal. But the hostile intruders might just change his mind about what normal means.

​Fallout is the prequel to The DPA Declassified Files trilogy. Final book comes out August 9th.

It started out as a vicarious activity. I wrote stories about things I wanted to experience. For example: finding an island of living dinosaurs or hanging out with robots from another planet. This is still a pretty big motivator. I wish I could move things with my mind, teleport, and literally kick ass. At this time I can’t do any of those things so the writing will go on.

I will write even if I never have any readers. Like real people, my characters deserve to be known and appreciated for who they are and that is what motivates me right now. I am working hard to make their stories known to the rest of you. I hope you get the chance know them.

I spent my childhood playing super heroes at recess and Star Wars after school. I wrote my first adventure story in sixth grade and haven’t stopped yet. I currently live and breathe in San Francisco where I graduated from San Francisco State University with a BA in Creative Writing.