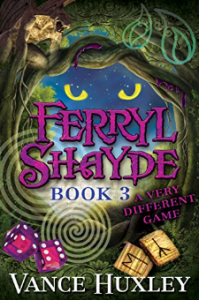 After the huge battle with a leech nest, Abel now has the key to Castle House, a big old house wreathed in lethal magic. But the key only opens the first door, leading him to the next clue. His friends want to help but the house won’t let them, and even the first puzzle needs sorcerer-level magic. Luckily Abel has something up his sleeve, or rather in his tattoo! Even so, he’ll need another missing key, and a way through all the other doors, before he can reach the mystery at the centre and claim his heritage. Along the way someone might work out just who or what a Fraggon is.Abel might make faster progress if sorcerers and an Archbishop would be a little more helpful. Even his solicitor, magical of course, can’t tell him what waits inside Castle House. Worse, magic isn’t helping Abel very much with schoolwork, keeping magical secrets from his mum, or a new schoolgirl he likes much more than he ever expected. With so many Taverners mastering their basic glyphs, some begin to think that magic gives them privileges and power. Abel and his friends, backed by Ferryl Shayde, decide to set out some rules.It all seemed so simple, but as with most things magical, a big explosion is only a careless moment away. In a few frantic minutes, Bonnie’s Tavern becomes a completely different sort of game!

Author Bio:
Vance Huxley lives out in the countryside in Lincolnshire, England. He has spent a busy life working in many different fields – including the building and rail industries, as a workshop manager, trouble-shooter for an engineering firm, accountancy, cafe proprietor, and graphic artist. He also spent time in other jobs, and is proud of never being dismissed, and onlyonce made redundant.Eventually he found his Noeline, but unfortunately she died much too young. To help with the aftermath, Vance tried writing though without any real structure. As an editor and beta readers explained the difference between words and books, he tried again.Now he tries to type as often as possible in spite of the assistance of his cats, since his legs no longer work well enough to allow anything more strenuous. An avid reader of sci-fi, fantasy and adventure novels, his writing tends towards those genres.