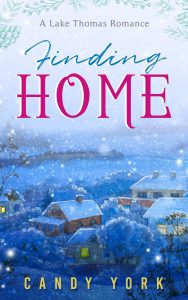 About Finding Home by Candy York

“You are one of the most stubborn women I have ever met,” he said in a slow measured tone.
She wanted to say you just met me, you don’t know me, but she knew she couldn’t argue with him. She had refused to get in his car; she had just acted like an idiot pretending she could carry the boxes of books and she knew, deep down, she had always been stubborn. It was another thing her grandmother had constantly pointed out when she was growing up. “I’m sorry, we’ve been going through a tough time lately, and I suppose I wanted to prove I don’t need anyone’s help,” she said.
“You mean, my help,” he corrected her tersely before he turned and jogged down the remaining stairs.

Totaling her car on the day she moved out of her apartment had not been Lorelei’s idea of an auspicious start to her new life with her daughter. But then, along came a tall, dark, handsome stranger to save the day, if only she’d been able to trust him.

Jefferson Cooper felt compelled to help Lorelei and her daughter after their crash, but they refused his offer.

Can Lorelei let down her walls long enough to let Jefferson in? And will Jefferson learn to trust again, so they can both find love?

Sparks soon fly when this couple are thrown together, and a near disaster makes them realize love is sometimes the only answer.

Candy York passed thirty a while ago, but her whole life she had dreamed of being a writer, but life got in the way. She explored the world and lived on several continents, before finally coming home to Virginia. She now lives an idyllic life with her husband and family, and between basketball and softball practices, she manages to write a few thousand words here and there.

She writes stories about small towns and families and she loves to weave in a few Easter eggs along the way from her own life.

Her first novel, Finding Home, is the story of Lorelei and Jefferson, but there are at least 4 more books planned in this series.