You are here: Home / Horror / For Her Bones 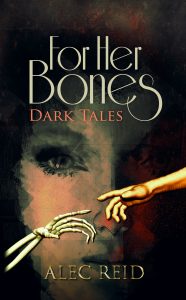 About For Her Bones

For Her Bones is an anthology of modern-day ghost stories.

Alec Reid’s ghosts of the twenty-first century seldom lurk in old houses or waft across chilly moors. His dark tales may breath alongside the supernatural, but they take place in broad daylight, in our daily lives.

Alec has had a number of careers, some of them still ongoing. After a brief spell with the BBC 2 arts programme, “Late Night Line-Up”, he moved on to Radios 1 & 2 where he produced “Night Ride”, giving Genesis their first national broadcast.
Alec went on to become an award-winning radio drama director and creator of radio documentaries and features, one of which required him to spend a week with the French Foreign Legion!
During that time, he also wrote and directed two musicals for radio, “Misrule”, starring Max Wall, and “Gilgamesh”, with Ian Holm; the latter was the BBC’s entry for the Prix Futura award in Berlin.After leaving the BBC, Alec was commissioned to write and produce a double CD tribute to Princess Diana. Within days of its release in America it had sold over 100,000 copies. As a result, he won the prestigious international Audi award for best creative work. Since then, Alec has produced hundreds of audiobooks, adapted TV and movie soundtracks for audio release, and was even commissioned to write two new ‘Thomas the Tank Engine’ stories! He also wrote book and lyrics for ‘Muscles the Musical’, which was premiered at The Landor theatre in London where the ‘House Full’ sign was up most nights. There are hopes for a revival in a larger theatre.

Alec’s publications have included two anthologies based on Radio 4’s ‘With Great Pleasure’, poems in ‘The Sunday Times’ newspaper and numerous magazine articles, and poems. ‘For Her Bones’ is his first fiction book. He is thinking about his next one.