You are here: Home / Horror / Game of Fangs 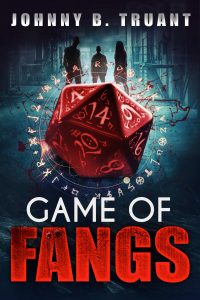 About Game of Fangs

When a team of live-action-role-players enter a massive Vampire LARP tournament, they have no idea two real vampires will be in the mix.

As the gamers play, gathering points and moving upwards through the floors of the convention center, the vampires turn on contestants, searching for a lost descendant, and the game gets gruesome and increasingly deadly.

Will amateur vampire hunters be able to sort out the bloody truth from fiction and save the still-living from the more-than-dead?

Johnny B. Truant is co-owner of the Sterling & Stone Story Studio, an IP powerhouse focusing on books and adaptations for film and television. It’s the best job in the world, and he spends his days creating cool stuff with partners Sean Platt and David W. Wright, as well as more than 20 gifted storytellers.

Johnny is the bestselling author of over 100 books under various pen names, including the Fat Vampire and Invasion series. On the nonfiction side, he’s also co-author of the indie publishing mainstay Write. Publish. Repeat. and co-host of the weekly Story Studio Podcast.

Originally from Ohio, Johnny and his family now live in Austin, Texas, where he’s finally surrounded by creative types as weird as he is.