You are here: Home / New Books / Gate of Betrayal 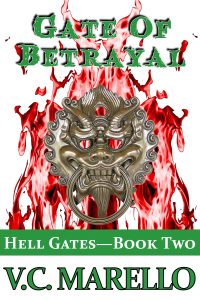 About Gate of Betrayal

Freed from torment, Alan and Grace have spent the last year together exploring the wonders of the world up and down the West Coast. Away from their lifelong self-imposed prisons while working at Tony’s Food Mart in San Francisco, they develop a deep emotional and physical bond with each other, alleviating the loneliness and mistrust they have known for so many years.
A year later, their bond is threatened by a shadow stalking them as they deal with one’s denial to share the truth and the other’s passiveness to pursue it. A tiny absence of information festers, deflecting them from reality, evolving into lies and ultimately death by disloyalty.
In their life’s pursuits, free from the Hell Gates, Alan and Grace inadvertently find themselves forced into preventing another Gate from opening. New enemies and allies form as betrayal internally gnaws at everyone’s soul, generating love, hate, and misaligned loyalties. It’s the perfect condition for the Gate of Betrayal to release another fallen angel upon Salt Lake City and the world.

While growing up, V.C. Marello was fascinated with Friday late-night horror and Sci-Fi reruns and it manifested within his imagination to create “What If…” scenarios.

Though his career took him into the technology field while raising a family, the “What if…” scenarios continued and transformed into stories. Now, those characters desire to reveal themselves to our world, no longer forgotten souls hidden in the shadows of the celestial plane of existence.