You are here: Home / Mystery / How I Outwitted the gods 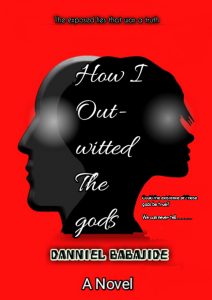 About How I Outwitted the gods

The Story tells us about the falsehood and vanity involved in the quest and manifestation of monarchial power in Umali, an Igbo (Ibo) community, coming from the distressing reign of the late king(Ochigbo), and his successors that in turn, brought about the curse of the gods upon his people.
Have the Umalians been told a lie? Could the existence of a god which they claimed be true, or could it be just mere fabrications? We would find out as we unlock the scroll bit by bit through the dramatic turns and mysteries in this work of fiction.

About Danniel? Okay, He is a young man who grew up in a library; that is, he grew up exposed to classic novels and comics (the stan Lee’s). He grew up exposed to the world of art as those that surrounded him (father, uncle’s, brother’s) were all artists in their ways. Danniel Babajide grew up to love and study arts in all its forms and went ahead to obtain his M.A in Linguistics and African languages. One thing that isn’t hard to notice is his cheerful attitude. He jokes a lot but unbelievably is an introvert (in some ways). He loves traveling and is yet to travel the world to learn and study the culture of every society in the world