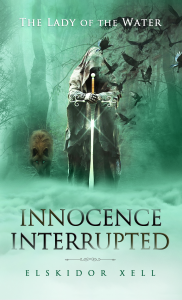 Two sisters long for the stability of a normal home with their adopted grandmother and the man they call Uncle, unaware that destiny, in the form of their deranged caretaker, Icaz, has other plans. When their mercenary uncle, Lonewolf, enlists his services to Icaz the two begin a preposterous expedition.
Lonewolf, a man with a variety of talents, plays the part of a reliable protector to the girls and devoted confidant to a less than trustworthy employer. While he enjoys being good, he loves being bad. With his sharp wit and knack for scheming, Lonewolf and his employer embark on a quest to assure an era of chaos is on the brink of revival. After learning his boss is more than what meets the eye, Lonewolf and Icaz dip their hands in pleasurable villainy, catching an unsuspecting nation off guard.

Meanwhile, the young girls have no idea they hold the key to how this treacherous game unfolds, and the ripples in the pond follow.
This book is the first in a series and kicks off an epic fantasy that plays out over the course of six books.

I was born in Texas as a menacing middle child with a strange imagination that I still don’t understand, but following it, led me to become the writer I am today. In my youth, I adventured with my little brother to places unknown. Sometimes we would go into the forest for miles trying to find a mysterious crystal to save the world from the demons waiting to get him, or finding a hidden enigma in the woods who fed us cookies like “Hansel and Gretel”.

At the age of twelve, my family and I moved from Texas to Tennessee where, initially, I had a difficult time adjusting to life and meeting new friends. I spent a significant amount of time enjoying various fantasy shows on TV as any other kid would, ranging from Highlander to Sliders to X Men -The Animated Series, or movies such as Watership Down, The Dark Crystal or The Last Unicorn. I was drawn to read books including The Hobbit, Lord of the Rings, or The Lion, the Witch and the Wardrobe, anything with a hint of fantasy always piqued my interest. When I wasn’t watching TV, playing RPGs like Breath of Fire, Earthbound, Final Fantasy and Chrono Trigger turned the wheels of my creativity, eventually leading me to write thousands of pages of fan-fiction devoted to the characters I cherished.