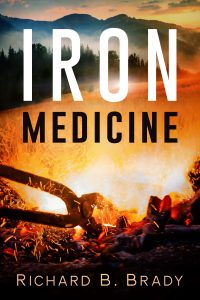 Spurred to vengeance by the murder of his cousin, a young man declares war on the beaver trappers encroaching into Blackfoot Country. Iron Medicine is the story of his war, his People, and his enemies. It occurs at the turn of the 19th Century, when Americans began manifesting their destinies on native Peoples of the new Louisiana Territory.

The story’s multiple perspectives include an American gunsmith, an African slave, and a Blackfoot woman who are caught up in a war to turn back the flood of beaver trappers who followed Lewis & Clark to the Rocky Mountains.

Two worlds collide when the line between savage and civilized disappears among beaver trappers determined to exploit at all costs the sacred beaver of the Blackfoot People.

In the early 1800s, beaver fur was one of the most valuable commodities on earth and gunsmiths were among the most important craftsmen in America. The gunsmith Hugh McGarity takes the chance of a lifetime and leaves civilization to venture into the heart of the new American frontier. Along the way, he discovers the reverence placed upon his skills by frontiersmen and Indians alike.

Iron Medicine chronicles a rare moment in American history when Native American’s held the upper hand. The story unfolds through the viewpoints of McGarity, the African slave Clement, and the Blackfoot woman Many Tongues.

Many Tongues is enslaved by her People’s enemies and during her captivity she learns French, the trader’s tongue. She becomes part of a Padouca camp whose leader agrees to help McGarity and his companions reach the beaver-rich waters flowing down from the Rocky Mountains. Among the party is Clement, a slave whose duties include making the charcoal so necessary to a gunsmith’s forge.

If you are weary of tales ending with a cavalry rescue, Iron Medicine should be on your reading list.

Author Bio:
Richard B. Brady pursued three careers before writing his first novel—journalism, construction, and computer management. Born and bred in Utah, the author has lived in every western state except Oregon and has been a lifelong student of western history, particularly the mountain man era. Iron Medicine is an outgrowth of that interest. He lives today at the doorstep of the Pacific Northwest rainforest with his wife Diane.