You are here: Home / Fantasy / Jack Rivers and the Isle of the Immortals 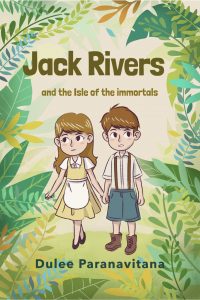 About Jack Rivers and the Isle of the Immortals

Jack Rivers is a seemingly ordinary child who has to deal with annoying visitors, an overprotective mother, bothersome bullies, his curiosity, and getting on with his everyday life. But when Jack least expects it, he is thrust into a magical world of wonder. While on his way home from the beach with his friend, Adams, Jack finds himself in a strange wood. At first, he wasn’t sure how he got there or how to get out of the place.

In the beginning, he fails to bring himself to believe that what he is seeing and experiencing is real, but things that are out of the ordinary keep happening, and he comes to the conclusion that they must be true. Queen Flora, who rules over the fairies, tells him that he has a great destiny awaiting him.

After the trip to the realm of the fairies, Jack runs off to escape the visit of his annoying aunt and cousin and ends up in a wood. There he meets with a witch who dwells in the woods. She knows about his hidden powers and his destiny to save the immortals by putting an end to the wars, battles, and attacks carried out by the witches, who are known as the mortals. The witch takes Jack, prisoner.

At the witch’s house, Jack meets Estella, a girl who is living with the witch. Together they hatch a plan to escape from the witch. Help arrives when they least expect it, and they manage to escape the wicked witch with the help of some special seeds given to Jack by a blackbird. With the help of a friendly unicorn, they escape from the witch. After being pursued, Jack and Estella arrive at the magical Isle of the Immortals through an archway. There they encounter the ruler of the Immortals and the strange sages who counsel him on his path. Jack learns that he is the lost heir of the Pixies.

While Jack is there, Queen Flora appears as a vision to the rulers of the Immortals. She warns of the impending danger that witches pose. The Immortals decide to get help from the rest of the magical creatures: the gnomes, centaurs, dwarves, and brownies living across the kingdom. Jack is chosen as the messenger to rally support for the immortals.

After leaving the castle of the Immortals, Jack is guided through the Western Wood by a Satyr. The Satyr leads them through a secret tunnel, and they arrive at “The Heart of the Isle of the Immortals,” which is the most sacred place in the realm.

Jack enters an ancient shrine that is the most magical place in the kingdom. There Jack and Estella are attacked by a gang of evil witches whom they manage to fend off. Then Jack enters “The Spirit world,” through the “Spirit Stones,” and meets with several “Knights of the Immortals.” There he is guided to find his dragon, to help him in the great battle to come. He also receives a Crystal, called the “Crystal of Chaos,” that has magical powers. Jack manages to find his dragon and gets back to the Isle of the Immortals with its help.

Back in the Isle of Immortals, Jack and Estella are nearly kidnapped by an evil coachman and end up meeting with a brownie. With the aid of the brownie, Jack goes off on a mission to recruit allies for the immortals.

They nearly fall prey to a trap laid out by the witches. There they meet Aunt Autumn, a local oracle. Jack uses the magical crystal to fend off the witches. Jack and Estella continue on their journey.

After recruiting the brownies, gnomes, and centaurs, a battle ensues between the immortals and the mortals. Jack and the Immortals emerge victorious from the struggle. Jack deals the final blow by taking down the witch Queen.

Thus, Jack Rivers manages to restore peace, at least for the time being, to the kingdom of the immortals. Jack is crowned the prince of the Pixies. Celebrations abound in the Isle of the Immortals, and Jack is honoured as a hero.

Dulee Paranavitana is the author of several books. Dulee’s first book, My Musings, was published in 2019 and is available on Amazon, while paperback copies are available in stores in Sri Lanka. Dulee has gone on to write and self-publish several works via the Amazon Kindle Direct Publishing platform. Some of her works include Ripples and Echoes, Jungle Jaunts and Laugh-Out- Lyrics. Jungle Jaunts is a work of fiction based on stories told by my grandfather. My Musings, Ripples and Echoes and Laugh-Out-Lyrics are all works of poetry.