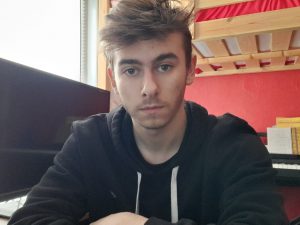 Tell us about yourself and how many books you have written.
I’m a young (16) British, self-published author. I usually write quite quickly, and I have some big plans for future releases. I love feedback and having the chance to improve from the 11 books which I’ve released so far (with a 12th on the way.)

What is the name of your latest book and what inspired it?
Last Hope. I’ve wanted to write something in which the world is affected by a phenomenon, something which puts everyone in danger. I’ve always thought that it would be fun to write, and so I went ahead and started a new series on that basis.

Do you have any unusual writing habits?
The only unusual habit which I could say that I have is that I write fast, at least I think that I write faster than the average author. This year, I’ve tasked myself with releasing a book every month, and I’ve managed to be consistent with that. I never want to release something which I’m not proud of, either, so I always put an exponential amount of effort into what I’m writing, meaning that I’m fairly content with the 6 (nearly 7) books which I’ve released this year.

What authors, or books have influenced you?
Michael Grant and James Dashner, I’d say, but only when it comes to small formatting and writing choices. For example, if I want to put emphasis on a word, I’ll write it in italics. I’m not sure where that originated, but I first saw it in James Dasher’s Maze Runner books, so that’s where I picked it up.

What are you working on now?
I’m currently working on a small book with three, tiny stories in it to give myself some extra time to work on next month’s release which I’m hoping will be over 400 pages long.

Do you have any advice for new authors?
Write what you want to write, and don’t be disheartened if you don’t like how it turns out in the beginning. I started by writing terribly, and, over time, with some guidance from a previous English teacher and the internet, I managed to improve my grammar. You get better with time and with effort, so don’t worry. As long as you’re having fun when you’re writing, you’re doing it right.

What is the best advice you have ever heard?
Put yourself first. Don’t over-work, stress-out or push yourself too much to get something done. If you’re not enjoying your work, you should take a step-back from it, have a day or two off, then come back to it with a fresh mindset. It’s good to be able to push-through writer’s block and to be able to force yourself to do things when you’re not in the mood, but it shows in the final product, so don’t ignore your needs.

What are you reading now?
Michael Grant’s Monster series, which is the sequel to his Gone series.

What’s next for you as a writer?
More work. I’ve just started a new series and I’m about to start a second one simultaneously. It may seem like a bad idea, but I’m going to plan everything important for both series’ before I begin working on the second one, so I don’t think that I’ll get confused when jumping from one series to another.

What is your favorite book of all time?
I’d have to say the first of Michael Grant’s Gone Series. It was incredibly fun to read, and it was a brilliant set-up for the rest of the series.