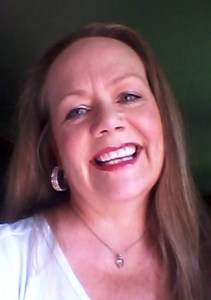 Tell us about yourself and how many books you have written.
I grew up on military bases, the daughter of a Canadian Armed Forces officer. Moving frequently made it difficult to make and keep friends. So, I read. A lot. My first adventure with writing was creating song lyrics for a band. Poetry and short stories followed, and finally full-length novels. Simon Says, Perdition Games was my debut novel and introduced returning protagonists, Samantha McNamara and Reece Hash. The second book, Skully, Perdition Games received positive editorial reviews from Kirkus Reviews, San Francisco Book Review, and Readers’ Favorite. Red Rover, Perdition Games will be available in June 2016. Each novel has a distinct plotline. The only commonality is the returning protagonists. It isn’t necessary to read them in order of publication.

What is the name of your latest book and what inspired it?
Red Rover, Perdition Games. It edges closer to the psychological-thriller side and the ending may disturb some readers. It offers multiple suspects, shocking twists, and a surprising yet inevitable ending. What inspired it? Well, I have no idea. The premise came to me unexpectedly. As I nursed it along, the idea grew and developed almost on its own. Beta-readers and critique partners offered positive feedback, and I’m excited to see what my editor thinks.

Do you have any unusual writing habits?
My pugs have beds under my office desk. There’s very little legroom for their human pet, but I make do. The rescued girl barks. This is odd for pugs, who aren’t chronic barkers, but wee Porsche has many important things to say that she wasn’t able to share in her hideous first home. You’d think this would be a distraction but the opposite is true. If they’re off at the groomers for a ‘spa’ day or out for a walk with another member of the pack, I can’t concentrate. Some writers have a beautiful muse to inspire them… I have three adorable pugs.

What authors, or books have influenced you?
I love The Prince of Tides by Pat Conray. The descriptive narrative is brilliant yet well balanced. Midnight in the Garden of Good and Evil by John Berendt is also amazing, especially his characters. My favorite genre is mystery-thriller-suspense. I admire Elizabeth George, Jonathan Kellerman, James Patterson, and Stephen King. Years ago, I met Stephen and his wife, Tabitha, at a diner outside Bar Harbor. I was twenty-three and with a young man who enjoyed alcoholic beverages. I had a lovely chat with Tabitha about writing… while the young man made a drunken ass of himself in the bathroom.

What are you working on now?
Red Rover, Perdition Games (release date June 30, 2016)

Death is the prize in a twisted game.

A beautiful ballerina commits suicide and a football player is the victim of a heinous murder. The only connection is PI Samantha McNamara’s close friend, a famous psychiatrist and self-help author. But when a psychopath targets Sam, ex-OPP Inspector Reece Harsh must set aside his personal feelings to prevent her from becoming the next fatality in a deadly game of cat and mouse.

What is your best method or website when it comes to promoting your books?
Pretty-Hot.com is wonderful as it allows readers to get to know the author. Book promotion is difficult in a saturated market, and any opportunity to reach out to readers on a personal level is a valuable asset. There is a limit to what you can do on Facebook, Twitter, and other social media sites. “Social” means a two-way street, and there’s nothing more irritating than a Twitter feed filled with self-promotion. I recommend to all authors to develop a website with a blog that focuses on interesting content and other authors. Read in your genre and tell your readers about those hidden gems. As a reader, I love to hear about emerging Indie authors.

Do you have any advice for new authors?
Read, read, read. Start writing reviews. Even if you keep your review to yourself. Then, read and review some more. Write your first draft and pop it in a drawer. Take it out six months later. If you cringe, figure out why, and write another. Keep doing it. When you’re thrilled with yourself and believe you have the next best seller, hire a qualified editor in your genre. Never submit anything without an editor. When it’s perfect, hire a qualified copy proofer. Respect your readers and don’t make them suffer typos.

What is the best advice you have ever heard?
Put together a book team of freelancers.

Writers are too close to their work to make an accurate assessment. You need an editor. It’s the best money you’ll spend. Never publish or submit anything with hiring a qualified copy proofer. I worked for years as a corporate proof-reader. I can easily pick up typos, dropped words, and grammar errors in other people’s work. My own? Not so much.

What are you reading now?
A Fraction Of The Whole by Steve Toltz.

I interviewed an author on my website who recommend it.

What’s next for you as a writer?
Keep on keeping on. If we lived in a world where I had to pay to write, I would. That simple fact makes the future easy. This industry requires tenacity, patience, and a serious passion for writing. It is not for the faint of heart or the arrogant. You must learn something every day and never give up.

As Margaret Atwood said, “Writing is work. It’s also gambling. You don’t get a pension plan. Other people can help you a bit, but ¬essentially you’re on your own. ¬Nobody is making you do this: you chose it, so don’t whine.”

What is your favorite book of all time?
The Great Gatsby by F. Scott Fitzgerald