You are here: Home / Fantasy / Ley Lines (The Wise Ones Book 2) by Lisa Lowell 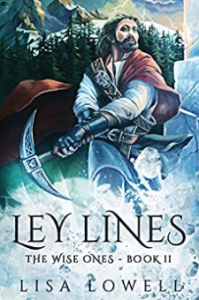 About Ley Lines (The Wise Ones Book 2) by Lisa Lowell:

A gifted healer accused of a crime she isn’t guilty of; a talented magician hunted by dark forces – in the second book in the Wise Ones series, unknowing players are entangled in a deceptive game.When an attempt to heal a villager’s broken leg goes awry, Gailin is accused of witchcraft and sentenced to hang. Driven by mystic instinct, skillful magician Vamilion walks 300 miles in a week to save her – and set in motion a series of events that will change their fates forever.In Ley Lines, two new pawns are woven into a game of magic and manipulation they don’t even know they’re playing. As new trials are suffered, thirsts for magic develop and unintended consequences emerge. Will the Wise Ones find a way to save themselves – and defeat the forces determined to tear them apart?★★★★★ “…so much fun to read… Characters are well developed and interesting.”★★★★★ “Excellent addition to the Wise Ones series.”★★★★★ “…a non-stop page turner”

Author Bio:
Lisa Lowell was born into a large family full of hands-on artists, in southern Oregon. In an effort to avoid conflict, her art of choice was always writing, something both grandmothers taught her. She started with poetry at six on her grandmother’s ancient manual typewriter. By her teens she moved on to pen and paper and produced gloomy, angst-ridden fantasy during adolescence. Her mother claims that Lisa shut the door and never came out until she left for university. During this time she felt compelled to draw illustrations throughout the margins that helped supplement her neglect of adjectives and consistent story lines.

A much appreciated English teacher, Mrs. Segetti, collected these moody musings and sent them in to scholarship foundations. Lisa got a scholarship for that rather poor writing, escaped Oregon and went to university. While she loved her family, her only requirement in a school was anywhere too far away to come home on weekends. She got as far as Idaho, Utah and then even Washington D.C. before she truly launched. She traveled to Sweden (Göteborg, Lund and Sundsvall) for a year and a half during college where she also reconnected with her heritage.

During college Lisa also fell in love and then had her heart broken. Suddenly she had something to write about. Every story written since harbors a romance and a tangled journey; a saga as it were, where the tale comes back to the start. She started to tap into Scandinavian myth and overcame fears of writing conflict. All her earlier failed starts and fascinating characters now molded into an actual story. Completing her degrees in Secondary Education and Masters in English as a Second Language at Western Oregon University, Lisa continued to travel and read favorite authors; Lloyd Alexander, David Brin, Patricia McKillip and Anne McCaffrey. She graduated with a teaching degree 1993.

Then, when she came back to Oregon, like a fairy tale, she met Pat Lowell. They met on Sunday, played racquet ball on Monday night and were engaged by the end of the date. The sense of peace in meeting someone with the same goals and values made it right. Four months later they were married. Lisa began reworking childhood manuscripts into credible stories, and this was when Sea Queen began. When children did not arrive as expected, the Lowells adopted three children, Travis, Scott and Kiana. At that point, Lisa chose to ease off writing actively for a time to focus on her family. However, she kept all the ideas and honed her skill while teaching Middle School English. Storytelling remained her true talent and made her a skillful teacher. In 2011 she was named VFW Oregon Teacher of the Year.

In 2012 a friend asked for manuscripts so he could learn how to get a book onto Amazon in e-book form. As she had several half finished works she could contribute, Lisa gave him one and when she saw how easy that seemed, the idea of publishing snuck up on her again. Her children were moving on, and she felt she could again begin to write. She reworked the first book in the Wise Ones series, Sea Queen, and began sharing it with beta readers. However, her friends wanted to hear the back-stories of some of the other characters so she started writing those into full manuscripts and realized that a series was born.

Publishing became more important when Pat had a terrible accident and developed Parkinsons. Lisa had to stay closer to home to help him and he encouraged her writing. She continued to teach English in middle school (someone has to) and blogs on her web page at www.magicintheland.com . At present she is developing a Word Press for her future work and tinkering with her next novels, Markpath, a set of sci-fi novels. She loves to write but also experiments with drawing, dances while she writes, sings when the radio is on and reads a great deal of poorly written essays by thirteen year olds. She still lives in Oregon, near waterfalls and Powells, the best bookstore on earth. She is still in love with her husband Pat and still loves writing tangled journeys.