You are here: Home / Fiction / Made of Magic and True Grit 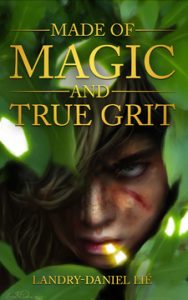 About Made of Magic and True Grit

Pinly had always lived in the shadow of his elder brother, Lion—never fast enough, strong enough, or daring enough to match his brother’s social prowess and skill with magic. While other fairies his age cut graceful trails through the forest and pulled off perfect pranks, Pinly struggled with the slightest use of his magic.

But fate had plans to test this determined young fairy with a true trial by fire.

When a fearsome army of skull-faced warriors marches on the doorstep of Pinly’s clan and takes his brother captive, Pinly must cast off all self-doubts and set forth on a journey that will shape him in the most remarkable ways. Through distant lands and hidden worlds where terrifying beasts and formidable opponents lurk at every turn, Pinly must draw upon all his experience to not only find his brother but himself and the true potential of the power he carries within.

Far from a fairy “tale”—more a fairy “chronicle”—Pinly’s trials take him straight to the heart of danger, discovery, and high adventure.

Landry-Daniel Lie is an Ivorian-French writer based in London, UK. He studied media where he confirmed his love for writing. After travelling for two years and finding inspiration in all corners of the world, he wrote his first book entitled MMTG: Made of Magic and true grit.