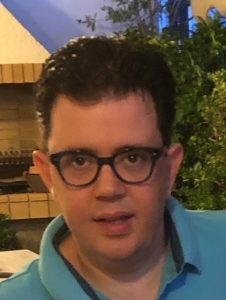 Tell us about yourself and how many books you have written.
I am a writer, digital marketeer and transformational leader who recently completed a circle of lessons around artificial intelligence. My first book back in 2004 was entitled “Mathematical Models”. I have been thinking of literature since I existed in the army. I still remember the first script I wrote back then and I would feel delightful to bring it to life at its original dimensions, perhaps it can work as a screenplay! I am passionate with books and my library, reading all sorts of things. I have self-published 2 projects, a romantic drama entitled ‘The Words of Emily Logan’ and a fairytale fantasy entitled ‘When Magic Truly Happens’. The Words of Emily Logan is a screenplay. I have also completed the first draft of a second screenplay entitled ‘Krista’s Instinct’. Though I believe I can have lots of alter egos in art, I also believe in homogenizing all these multiple identities including my education in one, that is the belief in the world of letters.

What is the name of your latest book and what inspired it?
As I have said above my second self-published project is a fairytale fantasy, a short story entitled ‘When Magic Truly Happens’ where it mingles Snow White and the Seven Dwarfs. What inspired it. First of all, I wanted to create a title that bangs! Secondly, I was obsessed with another fairytale which has initiated a series of trailers in YouTube, dealing with bears at Christmas. The initial story with bears entitled ‘When Magic Really Happens’ has dominated the web and it has been my motivation, in terms of just altering the title even though the story is original and unique.

Do you have any unusual writing habits?
Things that you own end up owning you… As a web creator dealing with time management, I should focus on being less intellectual and more kinesthetic, meaning to deal with the entire, social, organic sense of being a writer, acting or even better predicting and not just trying to understand everything before by studying it…

What authors, or books have influenced you?
Antoine de Saint-Exupery, having written The Little Prince has been a major influence. As a writer, he has proved how can an aviator, not being primarily a writer, managed to write a fairytale that has influenced the entire world. A small story, easily digested, with plenty of messages, proves that life can create the best stories ever… Also, one of my major influences in fiction literature has been Philip Pullman, having written the trilogy ‘His Dark Materials’. It’s amazing in there how scientific and pseudo-scientific elements have been unified with epic fantasy, storytelling and entertainment plus performing acrobatics between religion and philosophy.

What are you working on now?
Although the first draft of Krista’s Instinct has been completed and I will come to that in the future, I decided to quest my cinematic dreams by submitting The Words of Emily Logan for screenplay coverage evaluations at WeScreenplay, Hollywood’s #1 script coverage business. So, evaluations, my though laboratory and rewriting have been my recent thoughts. I am also looking forward for my next project.

What is your best method or website when it comes to promoting your books?
Being an omni-channel campaign builder has been my creative initiative so far, including using tools and websites targeting digital marketing efforts. Some will say that writing the next project is the best marketing method, even though I’m fond of creating a balance of lots of things.

Do you have any advice for new authors?
I can drill this advice from what I am doing this period. The case, my artistic debut, my first project in other words, has been submitted to the best Hollywood office, to provide script coverage and foresee its movie potential… The advice, if you writers believe that creative success comes without hard work, without torturous advices and plenty of sweat, pressure, notes, tones and lots of transformations, you are completely mistaken, even if we’re talking about the first or your sixth work. Writing is all about rewriting!

What is the best advice you have ever heard?
Be yourself! All other roles are taken…

What are you reading now?
I am not actually reading but planning to read the book of a Greek writer, Helen Galinou, ‘On a black background’.

What’s next for you as a writer?
Having dealt with three projects and being entangled with the thoughts of five, I believe reorganization is where I should focus after. Meaning, to think of the future, of how I’d like to proceed and what it means to be a writer is important.

What is your favorite book of all time?
The Little Prince of Antoine de Saint-Exupery. A book with lots of messages about vanity, children and grown-ups, death and resurrection, numbers, the fact that the universe listens, passions, although being written for children it can speak to the heart of everyone!