You are here: Home / Fantasy / Merewif 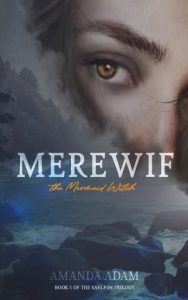 When Madge receives a moonstone necklace on her sixteenth birthday, she discovers she is not only a mermaid, but also, a witch.

Problem is, she never knew either existed in the first place.

As if wrapping her head around the fact that she’s a mermaid-witch isn’t enough, it also turns out her parents were royalty to her kind and didn’t die as she’s been told her entire life. Instead, they were murdered by her estranged aunt Viviane, who is now after her.

If Madge is to prove herself fit to lead her kind, she’ll have to hone her newfound Vala and unravel clues from her mother’s tome. But when Madge uncovers the dark power her murderous aunt wields, will she have what it takes to save them all?

After completing her degree at Northern Arizona University, Amanda Adam moved to Slovakia where she taught English to high school students. Upon her return to the States, she bought a sailboat and lived on it in the Ventura Harbor, before moving to Los Angeles where she wrote book adaptation screenplays for GP Taylor, a NYT bestselling author. After purchasing the book rights to GP Taylor’s Tersias, she moved just outside London while continuing to develop the script. She has since abandoned screenwriting for novels, and is living her ultimate adventure: marriage and children, and writing her own stories.