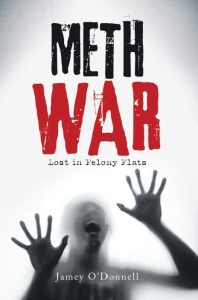 In 1993, the San Bernardino Valley became ground zero for a plethora of torture and murder. The Satanic Underground proclaimed war on the independent meth cooks and their associates, reclaiming their rightful place as the sole manufacturers of high-powered methamphetamine distributed and sold to the drug populace, turning human beings into soulless ghouls of the night that would do anything to satisfy their craving for the devil’s drug.

Born in Chicago, Illinois, Jamey O’Donnell spent most of his early years in and out of foster homes and juvenile halls, along with his two younger brothers, all being made wards of the court due to their mother’s alcoholism.

At 13 years old, he and his two younger brothers were flown to Palm Springs to live with their aunt and uncle. After a year being there, their mother and father came to California to get them, settling in San Bernardino. This is when he was introduced to drugs. After years of shame and abuse, he welcomed the drugs because they made him “feel human”. His drug of choice was methamphetamine. He began shooting meth in his early 20’s and did it until his mid 40’s.

At the age of 18, he began singing in rock and roll bands, writing original music and trying to get a record deal. At the age of 27, he almost got what he had been shooting for. He started a band called Exit and they recorded an album, playing nonstop in every club in L.A. that they could. By that time, he was already full up in his addiction, as was everyone else in his band.

Unfortunately, they split up just as they were being offered record deals, mostly because they couldn’t keep it together. Soon after, he began transporting large amounts of methamphetamine to Denver to support his habit and ended up settling there, and he’s been there ever since. He met a woman in Cocaine Anonymous and they got married, then had a kid, and that is when his life completely changed.

When his son was born, he looked at his dad and never looked anywhere else, just at him. When Jamey cut the cord, the blood squirted him in his face and nowhere else. It was “like a sign from God”. For the first time in his life, he loved someone more than he hated himself, and learned the true meaning of unconditional love. His son’s mother was severely mentally ill, which he did not know until after they got married, so when his son was 9 months old, he filed for divorce and custody of his son. Much to his surprise, he was awarded sole custody of him, and she could see him in a supervised visit once a week, which she managed to attend every other visit.

Jamey used methamphetamine intravenously most of his adult life, but he now finally had a reason to quit, so he began to do the 12 Steps of Alcoholics Anonymous with the desperation of a drowning man, all to ensure that he could be the father his son needed him to be. When his son was 3 years old, his mother stopped attending visits entirely and turned her back on him, never sending child support, or anything for Christmas or his birthday. It was as if she walked off the face of the earth, never trying to contact him again

To support them both, Jamey began hustling meat out of the back of his pickup truck, selling cases of flash frozen steak, chicken, seafood, and pork. It was a hard way to make a buck, but it paid the bills.

His luck would change upon a chance meeting with a man starting his own roofing company, offering Jamey an opportunity to learn the trade on the sales side of the business, and he took to it like a duck to water. After a year selling roofs, he was consistently making a six-figure income, and continued selling roofs as a career throughout his son’s upbringing, providing him with a stable home and yearly summer vacations.

Raising his son by himself, his boy is now a man and is a sophomore at Benedictine College in Kansas on academic and athletic scholarships while playing offensive lineman for the Benedictine Ravens.

Rory is studying for his degree in Journalism and Mass Communication.

Rory is also a Double Silver Palm Eagle Scout, which is rarified air in the world of Scouting.

“Even though he is away at college, he still consumes my life, and I wouldn’t have it any other way.”- O’Donnell

Today, O’Donnell lives in Denver and works as a delivery driver for Amazon, and he maintains an extremely close relationship with his son.

He began writing in the summer of 2021 and has written 4 books in the last 6 months. His writing goal started to be 5 pages a day, then became 10, and he seems to have settled upon a chapter a day. Each chapter is like a story in itself, so he found not to finish it in the same day led to scattered ideas without focus. Usually, O’Donnell wakes up at 3 or 4 in the morning and begins to write. It could be just an opening sentence, or a paragraph or two. He constantly gets up from the computer to think about where he wants to go in the story, and this process can continue throughout the morning, many times finishing by noon. At this rate, his start to finish time, not including editing, seems to be 3 weeks to a month per book.

“My dream is to buy property someday in the Rapid City area of South Dakota and spend the rest of my days writing the great American novel” states O’Donnell.

When asked what the inspiration was to write, O’Donnell says he writes about things he knows about. In the current national and geopolitical climate, the world is full of things that are happening that interest him. Most of them are very scary, but they are also well within the realm of possibility.

In Hunting for the Lamb of God, one of the families are preppers. O’Donnell has also been a prepper since 2012, and has amassed an amount of food, water, and essentials to survive a year or more should something bad happen.

In Meth War: Lost in Felony Flats, he writes about the world of methamphetamine addiction in Fontana, California. He was homeless and addicted there, and much of the book is based on real life people and scenarios.

O’Donnell first realized he wanted to be a writer when he was married to his son’s mother in 1999. He was writing his second published book and had the first 50 pages on printed paper, and the other 50 pages on a computer that got destroyed during an argument with his wife, when she picked up the computer in a fit of rage and smashed it into bits on the floor. After trying to retrieve what he had on the computer with no luck, he became disheartened and set it aside, vowing to finish the book one day. A whole 20 years later he finished it after his first book Hunting for the Lamb of God was completed.

One of the most surprising things O’Donnell learned in creating both books is that he is still an artist. In his 20’s, he was the lead singer for many original rock and roll bands, where he wrote most of the music. Fast forward to now and he finds himself a published author. O’Donnell discovered he has a lot to say, and a uniquely specific way of saying it.