You are here: Home / New Books / Moment in Time 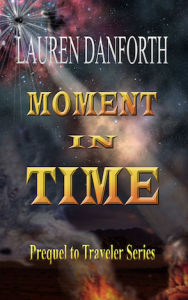 About Moment in Time

Three places. Three scientists. All pursuing their own theories of a universe they don’t understand.

One shaman sits before a fire. His visions of the results of all three of their ambitions tells of a future none of them expect. As the sparks of his fire fly upward, their worlds come into collision.

This prequel to Lauren Danforth’s TRAVELER series will puzzle you, and then realization will strike in the same way the three scientists become puzzled and finally realize what their actions will achieve in a single moment in time.

Born in 1947 (and yes, I have lived with the “Roswell Alien jokes” all my life), now that I’m writing sci-ﬁ stories, maybe it’s true. Growing up, I would stand at the fence surrounding the local airport and dream about ﬂying. At 14 I learned to sail, and my love of the sea was born. Graduating in 1965, I was looking forward to college, but for a graduation present Uncle Sam gave me a draft notice and free trip to Vietnam.

Though the time there was nothing I would like to repeat, coming home was much harder in 1969. Deciding to live my dream, living, and sailing the seas, I purchased a 33’ Blanchard Senior sloop, restored it and sailed it around the Northwest.

Moving to California to learn to ﬂy, I spent most of my adult life and 22,000 hours ﬂying heavy lift helicopters all over the world. After an incident in the helicopter and eighteen months of surgeries and rehab, I was forced to retire. So, I bought “Gracie”, a 48’ yawl and am currently living aboard and sailing the Northwest again.

All of my experiences haven’t taken me away from my 1947 alien origins, though. When not traveling on the waters, I’m traveling through space with my characters, exploring the universe and writing down their stories for your pleasure.