You are here: Home / Mystery / Murder By Dissent 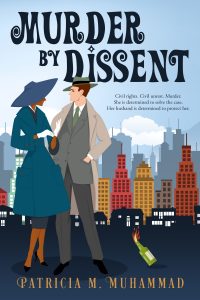 About Murder By Dissent

Protests, riots and someone who hides under the flame that scorches the possibility of improving race relations in America during the Civil Rights era. Jacqueline Sadie Thompson is a detective in a coloured precinct in New York. Lieutenant Reynolds assigns her and Johnson murder cases which occurred during protests. They visit the scene. Someone tosses a Molotov cocktail where they stand. The building collapses. Thompson’s British husband, William rescues her. Her partner suffers a coma. Johnson awakens. He recalls the disturbing notions his wife had concerning racial identity. Thompson faints at the station house and is put on leave. Her husband cares for her. Anderson, another detective, furthers their investigations. Johnson convinces one of his cousins to retrieve a book. The detective is aloof and does not disclose to anyone what he saw before the explosion. Jacqueline deduces a portion of it. Jacqueline is determined to solve the case. Her husband is determined to protect her. Who do they both need protection from?

Mild note: The protagonist and her husband share intimate moments-often. Although there is only mention of legs, arms, embraces and kisses, the remaining descriptions I use allegory and references to nature to describe their intimacy. This may be considered mild to moderately “Steamy” depending on the potential reader’s inclination.

Moderate to severe discretion (abridged): This book is a work of fiction. However, the author intended to create characters and settings historically accurate to the era it takes place in, the racially tumultuous 1960s. Certain terms used as racial descriptions now considered archaic, outdated or even offensive are used to reflect the past usage by both black and white Americans of that era.

Additional note: A portion of the main plot revolves a pivotal scene in which a few people are injured due to an explosion which destroys a building. This notice is to advise those who may suffer from post-traumatic stress disorder (“PTSD”) concerning traumatic events based the recollection of certain sounds or the imagery which may encompass them both.