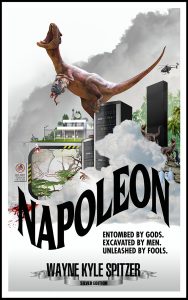 Entombed by gods. Excavated by men. Unleashed by fools …

The steel mesh started to break: first one joint, then another. Napoleon stood sideways on the fence like a parrot, his splay toes gripping the bars. He braced himself with his legs and pulled at the grid with his teeth. The muscles of his neck rippled; his growl was a steady trill. Metal squealed as he peeled a section back.

Lightning flashed nearby, followed by a crack-kaboom! In the wash of light, the man saw the dinosaur looking at him. Glaring at him. Its color had gone blood red.

He dropped the shock prod and swallowed, tasting bile. His head was swimming; he felt nauseated. The game had gone far enough, he realized. He had to end it—he had to end it now. He stepped back over to the control box and flipped it open, sought out the RUN ELECTRIFICATION button. He punched it with the bottom of his fist.

The air seemed to vibrate, and sparks exploded beneath Napoleon’s hands and feet. The dinosaur was knocked off the fence instantly. It crashed into the mud with a tremendous splash, and writhed violently. Then it struggled to its feet and latched onto the fence again. Sparks popped and spit; there was the smell of burnt flesh. Napoleon backed off, cocking his head. His foreclaws opened and closed. He sniffed at the electrically charged air, and at the ground. His left foot was smoking. He didn’t approach the fence again.

Napoleon looked at him, then shifted his neck to the side oddly. He was looking at something behind the man, something low to the ground.

The man turned around. There was nothing there but the steel hatch to the feeding shaft, set into concrete like an oversized manhole cover. It was dotted with dried blood and padlocked heavily. He turned back to Napoleon, dismissing the behavior, and found the dinosaur craning to look behind itself. Its head was cocked as though listening to something.

The man exhaled; he was tired of playing dino-games. “Well,” he began, preparing to prod it a final time, “here ‘s one for the road …”

A pair of headlights suddenly appeared in the distance, from the direction the T was looking. They were moving through the blackness out beyond the perimeter, winking in and out between trees. The man glimpsed the car as it passed beneath a street light: it was a sleek white Saturn, the kind employed by Atrax Security. Its bluish spotlight scanned the area.

The man’s pulse quickened. He glanced at his watch, but had to swipe a palm across it to read it clearly. It was 11:19. Damn … Now what? His heart pounded: Get out of here. He triggered the run doors, and they rattled up out of the way.

Napoleon swung his head around and peered down the shaft. His little hands opened and closed; his tail moved back and forth. He strode from the run abruptly, descending the “ladder” into his habitat. The man shut the doors. Then he took the flap of bent mesh in both hands and tried to straighten it.

It was no use, he decided at length. The stuff was stronger than it looked. He gave up and headed for the stairs.

Levi burst into the shop. Trevor was already coming up the hallway, his spit-polished shoes clicking over the tile, his keys jingling in perfect sync.  Damn, Levi thought. The bastard’s log would put him on Blue Level at 11:20—a full 10 minutes behind schedule.

He took up his mop and started mopping.

A moment later Trevor stepped into the room. “Hey Levi.”

Levi looked up as if startled. “Trevor! How goes it?”

The guard shrugged. “Same as always. How are …”  He paused, looking down. “Forget your hip-waders or something?”

Wayne Kyle Spitzer is an American writer, illustrator, and filmmaker. He is the author of countless books, stories and other works, including a film (Shadows in the Garden), a screenplay (Algernon Blackwood’s The Willows), and a memoir (X-Ray Rider). His work has appeared in MetaStellar—Speculative fiction and beyond, subTerrain Magazine: Strong Words for a Polite Nation and Columbia: The Magazine of Northwest History. He holds a Master of Fine Arts degree from Eastern Washington University, a B.A. from Gonzaga University, and an A.A.S. from Spokane Falls Community College. His recent fiction includes The Man/Woman War cycle of stories as well as the Dinosaur Apocalypse Saga. He lives with his sweetheart Ngoc Trinh Ho in the Spokane Valley.