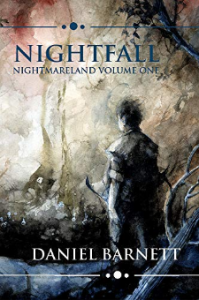 “Tomorrow died on the last morning of May. There were those who saw it happen, who watched the shadow fall, who felt the chop of the guillotine as the world lost its head. Everyone else witnessed only the aftermath, for the event itself lasted no longer than a moment. They stepped outside from windowless rooms, they climbed up from crowded subways, they pulled back the blinds to let in the sun, and found the nightmare waiting for them.”But the dark is only the beginning.NIGHTFALL is the first volume of the NIGHTMARELAND CHRONICLES, an ongoing serialized adventure horror epic following one man’s journey to reach his estranged daughter in a world claimed by eternal night.

Author Bio:
Daniel Barnett is a lover of stories–especially ones where things go bump in the night. He grew up on a healthy diet of Stephen King and went on to devour the work of Clive Barker, Ramsey Campbell, Peter Straub, Joe Hill, Richard Matheson, and many others.You can find his three novels, THE SAFE, LONGREAVE, and POOR THINGS, here on Amazon. His work has also appeared in Crowded Magazine, and his short story The Sadie Hawkins placed in the top 6 for the 2015 Aeon Award. When he isn’t writing or reading, he’s discussing fiction with others. Whether they want to or not.twitter.com/dbhfictiondbhfiction@gmail.com