You are here: Home / Horror / Nightmare from the Deep 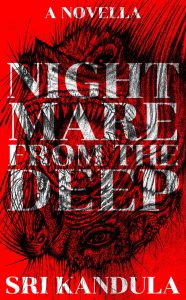 About Nightmare from the Deep

When a series of grisly murders terrify the residents in the small town of Bethlehem, four teenagers set out on the path to finding the killer. Soon they find themselves uncovering the dark past of the town and the secrets of its inhabitants.

Nightmare from the Deep, the debut novella from Sri Kandula, tells the story of Jacob, Bruce, Allison, and Kevin as they face their fears in a summer to remember.

Sri Kandula is an Indian-born American writer and director. He fell in love with storytelling at a young age, being an avid reader and gigantic film buff. This passion led him to pursue a Bachelor of Arts in Film-Video. He graduated from Pennsylvania State University with that degree in 2019. His debut novella, titled Nightmare from the Deep, is a horror mystery about four teenagers facing their fears in a town being terrorized by a series of grisly murders. He has also written and directed Road to No End, The Virtues of Solitude, an Official Selection of the 2019 Rough Cut Film Festival, and the crowdfunded post-apocalyptic short film, What Remains. When he’s not telling stories, he’s most likely watching movies, playing video games, or drawing.