You are here: Home / LGBT / On His Feet Again 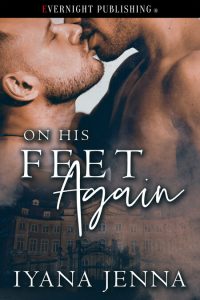 About On His Feet Again:

Lord Alexander, heir of Viscount of Winchester, is deeply closeted and preparing to marry a woman. Until a chance encounter with a handsome stranger at his bachelor party threatens to jeopardize the image Alex has worked so hard to create.

Dr. Jasper Kelley, the new personal physician to Alex’s uncle, harbors deep scars from a mysterious past. No one would ever guess that the brilliant doctor once led a very different, much darker life. The last thing he needs is to let someone in, especially a golden boy like Alex Winchester.

But one weekend is about to change everything. And if Alex and Jasper aren’t careful, murder and intrigue won’t be the only things crashing the royal party … It just might be love.

Author Bio:
Reading, watching movies, and being unable to find exactly the thing she wanted to read have led Iyana to write her own stories, mostly about man-on-man romance that has fascinated her since as early as the Starsky and Hutch era. Teaching and writing English course books during the day, Iyana spends her nights mostly dreaming about love stories between two men who are protective toward each other.