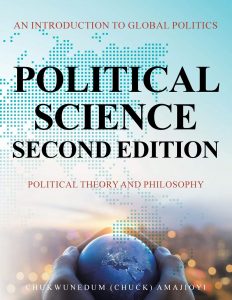 Political Science: An Introduction to Global Politics: Political Theory and Philosophy, is a book on World Politics. The book is an introduction to Political Science and International relations. In political theory, the book deals with the study of political instructions along with the theories of State laws, liberty, governance, politics, freedom, and equality. In Philosophy, the book offers different views and analysis over casual explanation of realist, liberal and ideology perspectives, including reincarnation. The book enables students to apply good analysis and in-depth understanding of their study of International relations and Political Science. In this second edition, the book continues to analyze the key concepts of Global Politics, like, power, corruption, sovereignty, political obligations, political parties, civil disobedience, rights, revolution, democracy, monarchy, justice, and injustice. The book underlines the cultural and political differences in the world. It is designed for the undergraduate students of Political Science and International relations.

Buy the book, and follow the author on social media:
Buy the Book On Amazon.
Visit the Twitter page.

Author Bio:
Chukwunedum (Chuck) Amajioyi migrated to the United States from Orlu in Imo State, West Africa. After High School, he went on to earn a Degree in Bachelor of Arts with a major in Political Science and a minor in Economics. He is a (UCD) University of California Davis Alumni. Mr. Amajioyi spends most of his time doing research on Political Science, International relations and Global politics. He is also a Lobbyist in California. As a hobby, he plays soccer and basketball with his children. Mr. Amajioyi resides in California with his beautiful wife and children.
Contact Mr. Amajioyi at amajioyi1@yahoo.com