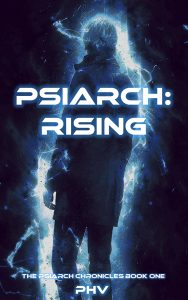 Somewhen else, in another somewhere…

The world of the 2070s is one dominated by the five Consolidates. It is also a world in which the advent of ‘aptitude-enhanced humans’—or alihumans—was predicted some three decades earlier by ‘Gardiner’s Genomic Extrapolations’.

Trajan Valence is a unique, dual telepath-telekinetic among his fledgling alihuman race. He is also better known for his life-saving deeds as the anonymous Samaritan called ‘Psion’. However, the scheming human supremacist Umbra Domini organization, as well as the radical alihuman supremacist Children of the Dawn movement, want Psion out of the picture. Permanently.

Between finding himself caught in the harrowing crosshairs of these two opposing factions, and with the notorious ‘Greys’ of the Secret Service of his Consolidate casting their probing attention on him, Trajan will have to confront his past and the worst of what he could become. Above all, he will have to discover and embrace his true nature if he is to save all he holds dear, let alone survive…

A B.Sc. (microbiology), M.Sc. (cell biology), and Ph.D. (cell biology), PHV was a tenured university professor and research scientist with a published record of 45+ peer-reviewed scientific papers and book chapters—either as first author, principal investigator, or collaborator. After a career of some 22+ years, he opted to take his early retirement in the summer of 2019 and plunge head-on in his (other) passion: writing. Reader of science-fiction/fantasy books, graphic novels, and comic books since his pre-teen years, he is currently enjoying his life as an ‘early’ retiree while focusing his creative energies into putting down in words a hero’s tale—Trajan Valence’s—that has been bouncing around in his brain for too many years.