You are here: Home / Featured Books / Ready to Die 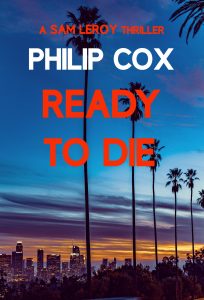 About Ready to Die

In the middle of the night, a woman reports her husband missing. Soon after, his body is found by the side of Mulholland Drive, killed by a single bullet through the head.

When an adult movie executive is found shot, execution-style, LAPD Detective Sam Leroy and his partner Ray Quinn take on an investigation with minimal clues and no obvious suspects. Statistically, if a murder is not solved within forty-eight hours, it is likely to remain unsolved, and so they are in a race against time to find the killers.

Meanwhile, both men are each facing life-changing events, all of which conspire to make this case all the more challenging…

Philip Cox was born and raised in the UK seaside town of Southend on Sea, which lies forty miles east of London. After graduating from High School, he began a career in UK Banking and Financial Services, and spent the next decades working his way through the ranks, finally becoming a Branch Manager of a major UK bank.

Philip left banking after the birth of his first child to be a stay-at-home father, and it was during this time that, in between changing diapers/nappies, he began to write his first novel, ‘After the Rain’.
Now having written twelve books, he is based in Hertfordshire, some twenty miles north of London, with his wife and two daughters.

During his spare time (what spare time there is between school runs and writing!), Philip enjoys indulging his interest in Model Railroading/Railways.

He is tall and slim, has a few grey hairs, and wishes he could get to the gym more often.