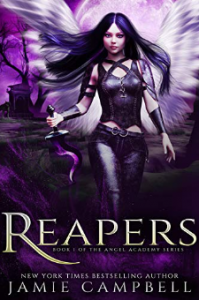 One takes life, the other gives it.

There are two sides of the Angel Academy of Excellence. The guardians are superior in every way and separated from the reapers by a big wall that runs right through the campus. Neither side is allowed to mix with the other.

Eighteen-year-old Posie Maxwell was just trying to survive on the street when strange people turned up and told her she was required to attend Angel Academy. Failure to do so would result in her immediate death. She had twenty-four hours.

Thrust into a world she had no idea even existed, Posie must come to terms with her true calling and accept the fact she is a reaper and required to take souls for the rest of her life. If only she could stop thinking about the hot guy on the other side of the forbidden wall.

When demons start attacking the reapers, Posie realizes there is a lot more at stake than her heart. At Angel Academy, there are perils around every corner. Her new school brings death closer than it’s ever been before.

Reapers is the first book in an action-packed series that is sure to delight lovers of urban fantasy.

Author Bio:
Jamie was born into a big, crazy family of 6 children. Being the youngest, she always got away with anything and would never shut up. Constantly letting her imagination run wild, her teachers were often frustrated when her ‘What I did on the weekend’ stories contained bunyips and princesses.Growing up, Jamie did the sensible things and obtained a Bachelor of Business degree from Southern Cross University and worked hard to gain her membership with the Institute of Chartered Accountants in Australia.Yet nothing compared to writing. Quitting the rat race to spend quality time with her laptop named Lily, Jamie has written several novels and screenplays. Spanning a number of genres and mediums, Jamie writes whatever inspires her from ghost stories to teenage love stories to tantalising murder mysteries. Nothing is off limits.A self-confessed television addict, dog lover, Taylor Swift fan, and ghost hunter, Jamie loves nothing more than the thrill of sharing her stories.