You are here: Home / Fiction / Red as Apple by Steven William Simon 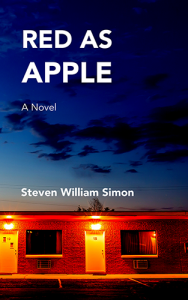 About Red as Apple by Steven William Simon:

It has been years since Keenan had been to the farm where he grew up. He had vowed to move on, to move up, but a buried family treasure has brought him back. Enamored with the 1980s Wall Street lifestyle, he itches to get back to New York City – but not without his cut. Reunited with his introverted older brother and confident sister, their lives will never be the same after this unexpected and unplanned family reunion.

Author Bio:
Steven William Simon is a poet and writer. He is the author of two novels, Red as Apple, Into the Fracking Fields, and one book of poetry, Out Pondered the Hare. With over 15 years of experience in video production and digital marketing, he has no business writing reflective, raw, and sometimes dystopian novels and poetry. Steven has a B.A. in film and video production from Grand Valley State University and, having taken an extended break from school, is now working diligently on his M.S. in marketing from DePaul University. He lives outside of Chicago and when he’s not spending time with his wife and children or working, he’s wrestling, doing BJJ, or getting punched in the face.