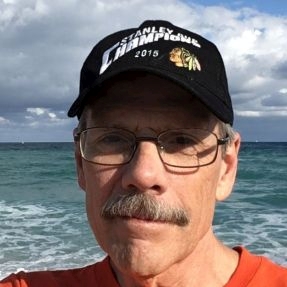 Tell us about yourself and how many books you have written.
I am a retired engineer who enjoys writing. I have written two books, Joshua: A Novel, which I started in the summer of 2018 and published in the early spring of 2019 and The Adventures Of Spike Bike, an anthology of short stories I wrote more than 30 years ago and published on the early internet. Two of the stories were featured in Cyclist Magazine, which is no longer in circulation.

That’s a hint for what I do when I’m not writing. I have four bicycles and I’m building another one. In my prime, I rode 6000 miles per year. I can’t do that kind of riding now, but I still get out frequently during the warmer months. My experiences as a road cyclist inspired The Adventures Of Spike Bike, which is a satire loosely inspired by Mad Max and Rambo, but it was mostly a way of letting out my own frustrations. The stories resonated with a lot of cyclists, and they went viral on the early internet. You can still find them on a handful of websites 30 years later.

What is the name of your latest book and what inspired it?
My most recent title is my novel Joshua. This endeavor started out as a few humorous short stories I wrote for other parents of children in middle school. They were inspired by the writings of Jeff Kinney and James Patterson, but as I got more involved with the characters I developed, the writing took a serious turn. My own experiences as a boy on the threshold of adolescence, my family, and the choices I made as a kid found their way into the stories, and I found myself writing something that was rather dark. I stitched the stories together, revised and rewrote most of them, and brought everything together in a way that brought the story to a meaningful conclusion. When the first draft was done, it became evident to me that I was writing a novel, even though I didn’t start out to undertake such an ambitious project.

Do you have any unusual writing habits?
I write wherever I am. I use Google Docs for my manuscripts, and I can access them from almost anything with an internet connection. I wrote the first draft of an entire chapter of Joshua on my phone, sitting in the cabin of an airliner at 35,000 feet. I edited and composed other parts of it in waiting rooms, on park benches, and even standing in line at the supermarket.

What authors, or books have influenced you?
I cut my literary teeth on science fiction. My father was a huge fan, and he gave me his books and magazines when he was finished with them. My favorite author of both fiction and nonfiction books is Isaac Asimov. He has a concise, unpretentious style of writing that I like and try to emulate, even though I’m not a science fiction author.

What are you working on now?
I have another novel in the works, although I’m only a few chapters in and I don’t know yet where it will take me. It’s a period piece, set in the 1980s, a sardonic view of the lives of the haves and the have-nots in suburban America. Before Joshua, most of my fiction was satire, and I am trying to return to that.

What is your best method or website when it comes to promoting your books?
I’m still learning.

Do you have any advice for new authors?
Be true to yourself. Write what you want to write, not what you think people will buy, and don’t give a second thought to the critics. If you are satisfied with it, publish it.

What is the best advice you have ever heard?
Something my father told me, long ago, which fits in with what I wrote above. He told me that if I was going to go into a career, it had better be in something I liked, because I was going to be doing it for most of my life. When I tried to change careers in midlife, I found my dad’s advice more relevant than ever.

What are you reading now?
I spend a lot of time reading articles and stories on Medium. It’s been a while since I’ve read anything I couldn’t start and finish in the span of 20 minutes, because that’s how my life is.

What’s next for you as a writer?
I’m working on my new novel, and I’ve had some ideas for short stories I might publish on Medium. Beyond that, I don’t really know. I’ve always gone where my writing takes me, and that will determine what’s really next, as opposed to any ideas I might have right now.

What is your favorite book of all time?
Lord Of Light, by Roger Zelazny. I’ve read it at least 6 times and I never tire of it.