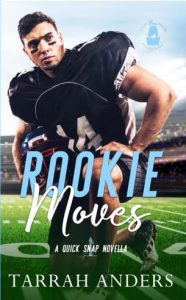 Rookie Moves is part of Kristen Proby’s With Me in Seattle Universe.

When the team decides he needs to clean up his more than a little rough-around-the-edges image, in steps Emily Masterson, the prim and proper daughter of Seattle’s Mayor with a planned meeting.

Only, she’s not as prim and proper as everyone thinks. Not with Grant and not when it comes to what she wants.

Is his image cleaned up and does the relationship work out after hearing hushed conversations?

Well, that remains to be seen…

Author Bio:
Tarrah Anders is a contemporary romance author who is all about the feels, with the twists of sexy mixed in between. Writing has always been a passion and Tarrah loves to share her words, her characters and the world that they live in with her readers. Tarrah enjoys creating characters that you can be friends with, so get ready to make some new friends.

She is originally from the San Francisco Bay Area, but living in beautiful San Diego with her family, while working in Program Management within the social work field.