You are here: Home / Fantasy / Runestaff Chronicles: The Awakening by Helen Row Toews 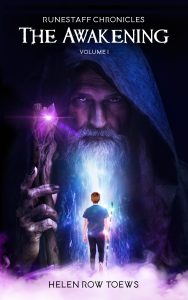 About Runestaff Chronicles: The Awakening by Helen Row Toews

Born to defend a far-off kingdom, can one teen outcast claim his heritage and face down an unspeakable evil?
Everything is going wrong for Kayden Bramley. Uprooted from his familiar surroundings so his family can care for his sickly grandmother, the fifteen-year-old is scared, lonely, and desperate for a change. But an even darker fate beckons when a mysterious man appears with a dramatic message: The troubled teenager is the last hope for an endangered magical land.

Bewildered when his beloved grandparent confirms his destiny, Kayden bravely seizes her Runestaff and agrees to take on the treacherous mission. Barely comprehending his role as heir to the throne as he gathers allies to his side, the tenacious young man plunges into a battle against sinister forces bent on conquest and destruction.

Will his quick-thinking courage be enough to protect the realm against a surging darkness?

The Awakening is the spellbinding first book in the Runestaff Chronicles YA fantasy series. If you like heroes coming into their own, perilous quests, and colorful supporting casts, then you’ll love Helen Row Toews’s vivid adventure.

I’m an author, humorist, Education Assistant, and professional driver (licensed to drive almost anything). I live on the family farm in Saskatchewan, Canada, and love the wide-open prairies. We raise Charolais cattle and gophers, not necessarily in that order and the latter merely by coincidence. However, one of my two passions is to travel and I’ve been to several countries in the UK and Europe.

My four children are grown and my husband is retired. He now takes care of suppers, stoking the fire, and changing the litter-box for our three cats (also not necessarily in that order). This allows me to fulfill my other passion which is to write.

This first book in the Fantasy series, Runestaff Chronicles, took its inspiration from Kayden, my grandson. I built a fantasy world around him and have had no end of fun creating the people and fantastic creatures that join him in this quest across the enchanted land of Erinbourne.

As a child, my favorite pastime was to break away from the limitations of this life and travel to a world where anything was possible. Now that I’m older, nothing has changed, and my fondest wish is to bring you that same escape into a fantastical adventure. Happy reading.