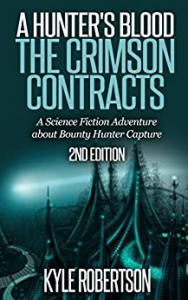 About (Sci-fi Action) A Hunter’s Blood: The Crimson Contracts: A Science Fiction Adventure about Bounty Hunter Capture by Kyle Robertson:

A futuristic tale of how law enforcement works in a darker society This story tells of how the bounty hunters are at the top of the food chain, and what methods they use to capture the more elite criminals. The corporation Dyna-Techor experimented, and created the perfect humanoids. The seven creations turned on the scientists, and murdered them. The corporation wanted their prodigal experiments back. They contracted The Hunter’s Guild to retrieve them. The guild dealt with the more extreme criminals, and Drakx Slazakohn was sent to retrieve them. Drakx was an experienced, hard boiled Hunter that only brought criminals back one way, dead. He acquired, and killed all six of the males, but was very surprised that his last contract was female. Her name was Sensus, and she was very different from the men. She was enhanced. Drakx felt her enhancements when she killed him seven times. That was when things got interesting. Drakx worked at the guild for years, but how he works for a higher power to retrieve the male souls Sensus brought back. They were called the DNAccidents. His reward for capture was life again, but failure meant eternal pain from perpetual death. Along with a woman thrust into his life, he has to capture the DNAccidents or die trying, and his death would be perpetual in the forever category. Drakx had to change while working for the higher power because his failure was more dire than the guild. Find out if Drakx can bring back the DNAccidents in A Hunter’s Blood: The Crimson Contracts.

Author Bio:
Kyle Robertson grew up an only child. His immediate family moved from Baton Rouge Louisiana to Milwaukee when he was 3. Without siblings, he realized very early in life he needed his imagination in order to make it through this life.

After graduating high school, ne did a stint in the military. After that, he began to learn the art of salesmanship. He was always an entertainment buff,

He sold many things from replacement windows to luxury vehicles to home entertainment install and all types of home electronics. He finally taught his trainees the art of selling home maintenance equipment.

He had a mishap and lost most of his sight and couldn’t sell anymore. In sales your normal day lasted 16 hours, so sitting, watching television all day, and collecting his disability check depressed him. He began to write to alleviate the boredom. That started in 2007.

This is his new career now. e writes fiction books with relevant subtext in them; He also has a motto he lives by. Your dreams don’t have an expiration date.