You are here: Home / Fantasy / Shadow of The Conjurer by Steve Gierhart 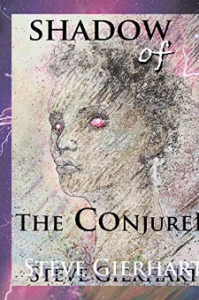 About Shadow of The Conjurer by Steve Gierhart:

Huntsville, Alabama lies at the foot of the Appalachian Mountains. It is a city of historical contrasts, at once Antebellum South as well as a modern concourse of technical prowess, a research and development center for the U.S. Army and NASA.And here is where the McNallys call home.They are successful professionals with civilian careers on Redstone Arsenal, but their success belies a foundering marriage. Jared, an engineer, is emotionally distant. His wife, Melissa, an intellectual property lawyer, pursues an affair to fill the void left by her husband.Tipping the scales of their flimsy bond is a journal of a young man, Jacob Thompson. In the 1830s his father owned the plantation Fiery Hill, the original boundary of which includes fifty acres now marking the McNally’s home. Within the diary, Jacob professes a love for a slave girl named Nika, an African brought forcibly to America, not only with chains, but with a secret and dangerous legacy. That legacy is resurrected, and for unknown reasons targets the McNallys.As a result, Jacob and Nika’s past intersect with Jared and Melissa’s present as all paths lead through an enigmatic African legend borne in the tribal myths of the Mande.*************Shadow of The Conjurer owes its existence to many successful authors of the gothic tradition. Like Anne Rice’s Lestat in Interview with a Vampire, Shadow’s villains are both dangerous but exciting, certainly desirable, their characters so sympathetic to engage the reader’s hope for their atonement.Gothic female characters, on the other hand, have been tragic. Their vulnerability made them easy targets for male dominance, such as Elizabeth in Mary Shelley’s Frankenstein, Lucy in Bram Stoker’s Dracula, or even the 20th Century character of Blanche Dubois in Tennessee William’s Streetcar Named Desire. It wasn’t until the sexual revolution of The Sixties that such characters evolved to a different level. Their power was reflected in cinema and flamed their strength in literature, sometimes becoming unhinged by repressed sexuality, such as Stephen King’s Carrie or Annie Wilkes of Misery.Now, these types of females are being left behind with another evolution, their sexuality portrayed within mysterious and suspenseful settings. Their power has, instead, morphed into that like the male hero, countering the darkness with their own personal action, not their lover or husband’s. Such are characters like Sookie Stackhouse of The Southern Vampire Mysteries of Charlene Harris, or Bella of Stephanie Myers’ Twilight Series.Shadow’s heroines, both black and white, reflect this positive power; and they do it by showing that fractures, even in character, are reparable when guilt is mixed with love and understanding in a cocktail of redemption. Shadow of The Conjurer goes further, building complex and positive portrayals of women and men of African descent, showcasing their strengths along with other sympathetic characters in Antebellum Alabama, believing in a gentleness that must have existed, at least in some, despite the slave culture.Not to sugarcoat the ugliness of slavery and its evil foundation; but even black historians agree that in rare occasions, blacks and whites partnered and loved in these most difficult conditions, often in similar ways that other outcasts such as Jews living in a Christian society did. That is, they hid their true beliefs because to do otherwise would be to invite destruction.So enjoy the story. Be patient as it unfolds and twines its story of good and evil, supernatural or logical, and spirituality versus belief in nothing and no one. Shadow of The Conjurer welcomes you. The story is worth its message of love and redemption.

Author Bio:
Dale “Steve” Gierhart is a retired business manager for the United States Army. Based in Huntsville, Alabama on Redstone Arsenal, his career lasted from 1975 to 2010 in which he managed contracts, finances/accounting, and cost estimating for several missile defense systems as well as their associated support equipment, among which were Stinger, Avenger, Chaparral, Sentinel, JLENS, SLAMRAAM, and Non-Line of Sight.He hails from Shawnee, Oklahoma; but most of his adult life has been spent in the beautiful hills of North Alabama where he lives with his wife, Bonny, who raises Tennessee Walking Horses.Steve has 4 children, a stepson, and 7 grandchildren and another on the way.Steve enjoys writing now that he is retired and plans more excursions of the imagination.He and Bonny, a retired engineer who worked as a contractor on several NASA and Army programs, will travel in their retirement though 15 horses, 4 dogs and 3 cats can crimp the best of plans.