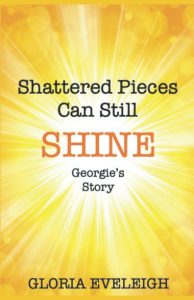 This story loosely based on a real-life story, is about Georgie, a child born to a single mother just after WW2 in a small village in Cumberland. After an initially happy first few years of childhood during which Georgie dreams of becoming a dancer, she finds herself the victim of sexual and psychological abuse by her stepfather, and then neglect and rejection by both her mother and her absent father. Eventually Georgie runs away to London where, after a short period of rough-sleeping, life seems to become more positive for a while, and she is able to kick start her dancing career. But things go badly wrong, and Georgie finds herself imprisoned into a life she did not choose, with little chance of escaping. She had rarely prayed to God, but it seemed He was watching over her …

Gloria Eveleigh has three adult children and five grandchildren. She lives on England’s south coast but was born in South London just after WW2. She grew up on a council estate, experiencing familial sexual, physical and psychological abuse within a dysfunctional family. Despite this, she did well at school and spent the first part of her career as a research scientist. She then studied to become a social worker, specialising in the area of safeguarding, and eventually running her own safeguarding consultancy. She is now a champion for survivors of abuse and uses her writing and regular posts on social media to ensure that the issue of abuse in all its forms is kept high in the public narrative. Through this, Gloria hopes to break down the wall of silence that often prevents victims from reporting, and in effect protects the perpetrators.

As a child when abuse was hidden, not believed, and not acknowledged, Gloria’s experiences resulted in an emotional life sentence. She managed to turn this around, and is now a champion for abuse survivors, using her writing and social media posts to keep the issue of all forms of abuse high in the public narrative.