You are here: Home / Featured Books / Sisters In Cold Blood 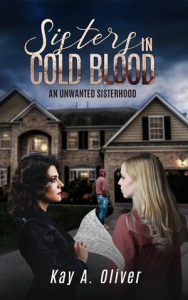 About Sisters In Cold Blood

Keri Shaw discovers a confession letter dated 1909 written by a serial killer who is already dead and was never charged with a single crime. The letter holds clues to where the bodies may be buried but they need to figure out this puzzle first by following the twisted path laid out by a ruthless killer years before.

What Keri and her husband, Jade, did not account for was Detective Alison Valencia, ties the serial killer had with another famous killer, and the shadowy figure that is following their every move.

Will Keri and her husband find the serial killer’s dumpsite and prove the letter is real or become his last prey?

After the success of her first fictional book series, Award-Winning “Voice of a Mummy: The Dr. Kaili Worthy Series,” Kay A. Oliver managed to merge her two biggest passions, the love for writing and science, in an emotional, romantic thriller that followed “Shooter’s Treasure,” earning her four stars out of four in reviews.
Kay A. Oliver was a prolific writer in the entertainment industry for many years, and she has been writing since her youth, winning many different awards in the course of her career. Now she is following her passion for authoring fictional books.
This book, being her latest page-turner, leaves nothing to doubt. Her writing style and Hollywood experience never deliver a dull moment. Her imagination is quickly making her a legendary storyteller of our time.
Kay A. Oliver graduated from California State University, Fullerton with a Communication: Radio, TV, Film degree. She then obtained her master’s degree in Business, Finance. She is a current member of the TV academy.