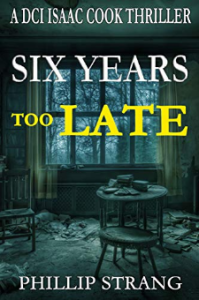 Always the same questions for Detective Chief Inspector Isaac Cook — Why was Marcus Matthews in that room? And why did he share a bottle of wine with his killer?

It wasn’t as if the man had amounted to much in life, apart from the fact that he was the son-in-law of a notorious gangster, the father of the man’s grandchildren.

Yet, one thing that Hamish McIntyre, feared in London for his violence, rated above anything else, it was his family, especially Samantha, his daughter; although he had never cared for Marcus, her husband.

And then Marcus disappears, only for his body to be found six years later by a couple of young boys who decide that exploring an abandoned house is preferable to school.

Phillip Strang, an avid reader since childhood, was born in the late forties in England.

In his early twenties, the author, with a degree in electronics engineering, left England for Sydney, Australia.

Now, nearly fifty years later, he still resides in Australia, although many intervening years spent in a myriad of countries, some calm and safe – others, no more than war zones.

The author of thirty-one books, the majority of them crime thrillers based in the United Kingdom, he has also written several books on terrorism and one on a pandemic.