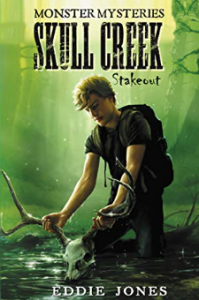 Nick Caden finds a body with fangs, bite marks on the neck and a stake driven through the heart. Is there a vampire killer on the loose In Transylvania NC?
Last summer, Nick Caden became an Internet celebrity for almost a whole day when he discovered Billy the Kid’s killer in the “living” ghost town of Deadwood. (Not the real Billy the Kid — he’s been dead for years.) When the owner of the Cool Ghoul Gazette learns of Nick’s super sleuthing skills, he hires Nick to investigate the death of a vampire. In Transylvania, North Carolina, Nick finds a corpse with fangs, bite marks and a stake driven through its heart.

But once he begins to peel back the clues surrounding the murder, Nick finds his new job is not only dangerous but could suck the life out of him.

★ Want to help teen sleuth Nick Caden solve a vampire murder in Transylvania, North Carolina? ★
Complete the Skull Creek Stakeout: Official Criminal Inquiry: Write a Book Report – Catch a Crook to see if you have the makings of a homicide detective. With this easy-to-follow “homicide detective” worksheet, you can fill in the answers to the questions while you read. When finished, your book report should be thorough enough to convict a killer! Check out the book report questions on this page under the “From the Author” section.

“This series has the same longevity and wholesome quality as “The Hardy Boys” and “Nancy Drew” but the author writes for today’s youth.” ~ Amazon review

“I enjoyed reading this fun, suspense adventure. Great book for middle school. Teen boys and girls will enjoy it, too!” ~ Amazon review

“I would think it would be for ages nine and up. A good Christian book for boys.” ~ Amazon review

“I was guessing until the end of the book. I did not know who it was. Even adults will enjoy this book.” ~ Amazon review