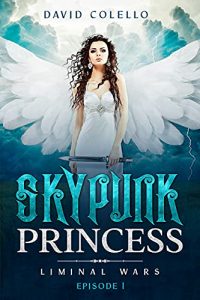 Sometimes it takes a Princess with a plasma sword to pick up the pieces of a failed world. In the aftermath of climate disaster and the fall of human civilization, a brave few have formed new societies in harmony with nature. Now the AI cities are moving to eradicate these rebels.

Eliana Skybound is an elite Sky Ranger, who charges into a swarm of drones with no fear. Her nanofabric wingsuit makes her a powerful force, but even she has her weaknesses.

Leva Kailani is a Mermaid princess who has yet to fully choose her biohacked form, which makes her a fierce crystalline scaled distraction of the best kind.

After tragedy strikes, their love has a chance to remake the course of history, but only if they have the strength to endure.

David Colello is an ecopunk prophet, making badass lemonade out of apocalyptic lemons, and squinting hard to see the good.

Following his time at Boston University earning degrees in English and Philosophy, he owned a personal training studio, worked in freelance copywriting, became a stay home father to three little future punks, and now publishes science fiction for a world where wonder is in short supply.