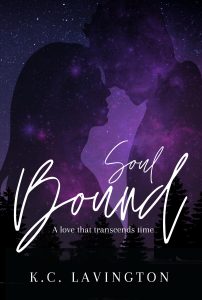 About Soul Bound by K.C. Lavington

For thousands of years, Celeste and Nova found one another through countless reincarnations. When Celeste grows restless in the afterlife, she wants to live again. The only problem is convincing Nova, who remembers their “happy” lives a bit differently.

At Princess Rosalina’s birth a betrothal tournament was arranged, sealing her fate. Eligible men throughout the kingdom enlisted to compete for her hand. Her parents favored Dmitri, a Lord who has trained for the competition since he could wield a sword. Rosalina thought she favored him as well, but a chance encounter with Caden drastically altered her plans. Their souls connected in a way that neither logic nor reason could explain, but the stars are not bound by such earthly notions. They embarked on a forbidden romance with only the help of Margaret, Rosalina’s loyal handmaiden and closest confidant.

In order to spend his life with Rosalina, Caden must first win the betrothal tournament. One hundred forty competitors, five life-threatening tasks, and the ever-unrelenting Lord Dmitri stand in the way of their seemingly predestined love.

Will Caden emerge victorious, or have the Fates already woven a different path?

K.C. Lavington graduated from Queens College with a BA in Psychology. Clearly she is putting her degree to good use. She lives in Queens with her partner and their dog Khaleesi. Her hobbies include: beat boxing in the shower, binge watching trashy reality tv, reading, wearing headphones and pretending to listen to music so no one will talk to her, and procrastinating writing.

She formed Shattering Glass Publications because she has a lot of stories to tell and wants to find new voices to elevate. As a queer WOC she aims to “obliterate glass ceilings and shatter stereotypes” and would love to work with similarly motivated writers. She also wants to retain all of her book rights and allow other authors to do the same, but if Disney ever offers her a deal, she might have to sell out.