You are here: Home / Horror / Soulless 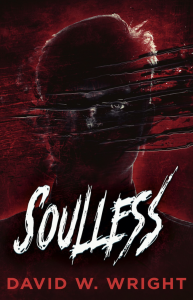 David W. Wright, author of Yesterday’s Gone and the No Justice series, brings you the dark, horror stand-alone novel Soulless.
Mickayla Waters is haunted by the death of her twin sister Rose. It was a childhood tragedy that tore their family apart.
While falling deeper into guilt and addiction, Mickayla is recruited by a fallen angel to carry the healing power of a sacred relic into the den of a cult attempting to gain control of Burg City.
If she fails, she’ll lose the souls of millions.
If she succeeds, she’ll lose her own.

David Wright is a suspense thriller writer and co-author of the bestselling #1 horror and #1 sci-fi series, “Yesterday’s Gone.”

With Nolon King, he is the co-author of the standalone suspense thriller “12” and the vigilante thriller series “No Justice.”

With Coraline Cole, he is the co-author of the dark fantasy series “ForNevermore.”

With Sawyer Black, he is the co-author of the horror series “Monstrous.”

He is the author of the non-fiction book, “Into the Darkness” which looks at how books and comics provided an escape from his youth and now he writes to offer that same escape to readers.

He is also one third of The Story Studio Podcast with authors Sean Platt and Johnny B. Truant.

He currently lives on the east coast with his wife, his young son, and the world’s most poopingest cat.