You are here: Home / Fantasy / Spell of the Black Unicorn (Chronicles of Zofia Trickenbod Book 1) by Lorelei Bell 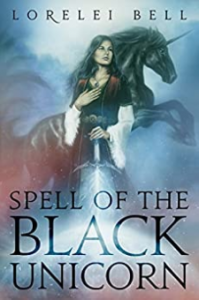 About Spell of the Black Unicorn (Chronicles of Zofia Trickenbod Book 1) by Lorelei Bell:

Zofia Trickenbod is a sorceress from another planet living here on modern day Earth (which leads to a lot of lying). She’s trying to keep the Stone of Irdisi (the most powerful magical implement from her world, which she is the current keeper), out of the hands of the ex-Dark Lord Vesselvod Blood’s grasp, risking life and better judgment in order to do so. Blood wants the Stone so as to become all-powerful again (what’s up with these dark lords anyway?).For the past five years, Dorian, her husband has been thought to be dead. So when he returns as an “undead” Zofia is a bit miffed (more than mildly), at him for not getting word to her so that she wouldn’t try and make a new life for herself on this strange planet where she and her off-spring can’t practice magic in the open (and where a nosy neighbor calls in the police if she so much as sneezes).But after a while she gets used to Dorian being a vampire. In fact, he’s quite good at it, along with being something of a scoundrel. But he needs his powers back, which means he has to become human again. Zofia and her Aunt Tillie team up to find a spell and potion that can return him back to the living. But before they can give it to him, he becomes a prime suspect in a murder investigation, and is put in jail. Her cop boyfriend (yes, her life is just full of crazy events), Richard, finds it difficult to accept that Zofia’s husband just happened to return after she’d told him he was dead. So, when Dorian disappears from his jail, Richard is determined to find him and stalks Zofia, and searches her house.Not to forget our mythical creature, the black unicorn, which is spotted early on—a warning that Blood is in the vicinity, as the creature goes where he goes, hoping to get his white coat back. This causes alarm in the family. Meanwhile, the unicorn becomes infatuated with Zofia’s 16-year old daughter, Blanche. When nosy neighbor, Lolly, spots the animal, it’s just another excuse for her to call the police.Did I mention the men in Zofia’s life? The list is as follows: her husband, Dorian who is now vampire puts the moves on her; Richard, cop and now ex-boyfriend who makes things complicated; an amorous demon, Erebus, who wants something in return for her son’s soul (bet you can’t guess what), and the part-god/wizard, Stephen, who has the hots for her, and she resists the best she can.A light fantasy with adult themes that might remind one of the TV show Bewitched, but it has it’s own brand of humor, spell casting and adventure.

Buy the book, and follow the author on social media:
Buy the Book On Amazon.
Author Bio:
As a young impressionable teenage girl, who had no mother to tame her, Lorelei ran barefoot most summers, climbing trees higher than the boys in her neighborhood. “I was born with a crayon in hand, and was called ‘artist’ my early years because of my art abilities. Then, I discovered writing. I now use a computer, but pen and paper will always be a suitable alternative.”

She also became obsessed with vampires. She blames the dark soap opera “Dark Shadows” with her desire to learn more about vampires. And then there was Dracula movies, which she could never get enough of. She never liked that he was hunted down and killed. She thought that it was a love story gone wrong. And eventually she wanted to correct that. Eventually she did, putting pen to paper. Ha-ha, take that Brahm Stoker!

She took creative writing courses in high school and college, feeling she’d found her true calling. However, dyslexia would forever taint the writing. But it didn’t matter. Story is what matters if it’s told right. The itch to write came and would never stop.

“I love to create a world you can taste, smell and feel, with characters you can identify with, love or lust for, or hate, and villains you may love to hate and want to read about them throughout a series. This is what I’ve done with the Sabrina Strong series. The characters have all got their own personalities, needs, hates and idiosyncrasies. I refused to fall into the pre-teen glittering vampire fiction peg. In fact my writing doesn’t fit into any one certain category.”

Always craving the quiet and tranquility of nature and the outdoors, Lorelei makes her home with her husband of 30-plus years, on the edge of a forest preserve where pheasants, deer, opossums, and the occasional turkey and bald eagle may show up. Hobbies include gardening, long walks, even longer road trips to the western states.

Other writing fits include her mystery series, Lainey Quilholt Mysteries; other books of fantasy include, Chronicles of Zofia Trickenbod (sorceress): “Spell of the Black Unicorn” & “Spell of Dark Castle”.

Baby Boomer, novelist, artist, naturalist, Lorelei has been writing for over 40 years.