You are here: Home / Fantasy / Stone of Destiny by David Miller 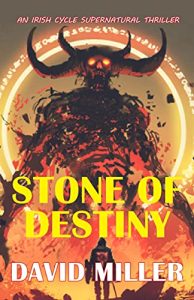 About Stone of Destiny by David Miller

A Boston cop. A Celtic demi-goddess warrior woman. A centuries old Japanese vampire. And a race to find an ancient artifact that can command armies. In modern day Boston. Yeah, right.

If encountering a warrior woman on horseback, complete with chain mail and a sword, didn’t blow Sean Regan’s mind—a former police detective recently busted down to patrol—the red-clad leprechaun carrying a magic lantern, and the giant, bloodthirsty vulture that exploded into a puff of smoke certainly did.

Add to that a series of bizarre murders—bodies whose very souls were sucked from them—freaky October snowstorms, a deadly search for an ancient Celtic artifact called Lia Fáil, and a pesky vampire on the loose, all leave Regan’s grasp on reality tenuous at best.

Crap like that doesn’t happen in modern day Boston. Does it?

The Irish Cycle Series – A unique urban fantasy adventure with a mix of mythological and supernatural elements set in contemporary Boston.

DAVID MILLER grew up in New York in the early ’70s watching Dark Shadows during the day, the Night Stalker at night, and the weekly Creature Feature movie on an old black & white RCA television set every Saturday night with his father. It was there watching the classic Frankenstein, Dracula, and the Wolfman movies his love for the supernatural was born.

It’s no wonder now as an adult (chronologically anyway) he writes stories with fantastical creatures, mystical happenings, and occult goings-on, of worlds where anything can happen…and usually does. For fans of Supernatural, Buffy and the like.