You are here: Home / Fantasy / Storyteller (The Hurricane Chronicles Book 1) 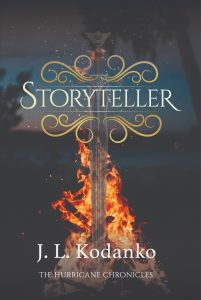 About Storyteller (The Hurricane Chronicles Book 1)

She knows all the legends, but she doesn’t know her own story.
Reka has a gift for storytelling and loves spinning tales around the fire to entertain her traveling troupe of acrobats. She tells tales of mythical creatures, of the old king who ruled Orosea and of the upheaval his sons brought upon the land centuries ago. But what if the stories she tells are more than just myth? As Reka is drawn into the still unfolding story of her drought-ravaged land, she finds that she may have a bigger role to play than just surviving another day. Accompanied by her faithful friends, and a warrior whose cynicism matches his skills with a sword, Reka coaxes everyone around her to become the best version of themselves. Will loyalty and friendship prove strong enough as Reka discovers the truth about herself, and the others around her? Or will it tear them apart? Is there hope for a better future in Orosea?

My first memory of a writing assignment should have been a signal to me that I would end up writing epic fantasy stories. I was tasked with a two paragraph story in second grade, and I filled two pages, front and back! My next memory of writing is a fun little story in sixth grade called Molly and the Terrible Day. It was a cast full of anthropomorphized kitchen items; the star, Molly, was a chipped cup (perhaps a Beauty and the Beast reference?). The villain was a blender, and the kitchen item in distress was a birthday candle. I printed it out (by hand!), bound it, and even gave it a hand drawn cover. So, it shouldn’t be a surprise that I eventually ended up becoming serious about writing stories, since I was obviously a child prodigy.

High school and college gave me enough writing assignments about horribly boring things that I never had time for creative writing. Then I got married and started playing around with words again. I wrote a decorating blog for seven years, but then I started having kids, and time (along with sleep, and clean clothes) became a scarce and oh-so-precious commodity. Fast forward a few years, with a husband who never stopped encouraging me to write, and I finally just sat down and started writing. And the rest, as they say, is history.

C.S. Lewis, who should be crowned supreme wordsmith of all time, said, “you can make anything by writing.” That’s what I love about writing. The possibilities. The characters that I end up falling in love with. The magic and the creativity. I’m so happy to have discovered something that I have such a passion for. I hope you enjoy reading my stories just a fraction as much as I have enjoyed writing them!

I firmly believe that books are windows into other worlds, and I have so many favorites it would take forever to list them all. In fact, I’ve often referred to the books I own as my friends (much to my husband’s chagrin), and I’ve dreamt of a Beauty and the Beast-esque library filled with multiple stories of books. But, really, who wants to do all that dusting? Here’s a partial list of the books I could read time and time again, or books that I’m still thinking about years later;

The Lord of the Rings – J.R.R. Tolkien (Adult Fantasy)