You are here: Home / Horror / Strung by Per Jacobsen 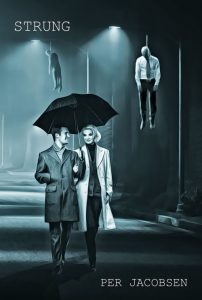 About Strung by Per Jacobsen

Author Randall Morgan is on his way home after spending fourteen days in the secluded cabin where he always goes to write the endings of his books. However, when he arrives in his hometown, East Alin, he is greeted by a disturbing sight.

At a traffic light near the city limits, someone has turned a lamppost into a makeshift gallows, and in it a man—dead and decomposing—hangs.

The sight of the hanged man is terrifying in itself, but it soon dawns on Randall that there are other—and far greater—problems in the small town. Because while he is waiting in his car for the police to show up, several people pass by the crime scene—and not a single one of them reacts to the fact that a dead man is hanging in the middle of the street.

Something has gone completely wrong in East Alin while Randall has been away.

Per Jacobsen was born in 1981. He is originally from Denmark, but now lives permanently in Spain with his wife and two children. He is a trained teacher and has previously taught subjects such as Danish, English and psychology at Campus Vejle. Today, however, he is a full-time writer.