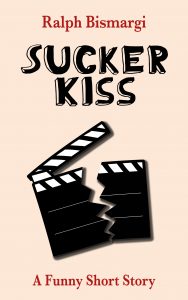 While filming a sitcom with a live audience, a young female director struggles because a quirky audience member doesn’t know how to laugh normally.

Author Bio:
Ralph Bismargi is a writer, producer and director from Paris. He has traveled and lived across four continents. This exposed him to different cultures and allowed him to be fluent in four languages. Having initially earned a degree in International Business, it was his desire to explore hobbies outside the corporate world that led to his true calling. Inspired by his teachers in writing and acting, Ralph decided to dedicate himself to the performing arts by listening to and learning from his mentors.

His first writing experience came at Second City Chicago where he took an intensive Comedy Writing course. A Professional Screenwriting certificate from UCLA would soon follow. To date he has produced six comedy films – including BIRTH DAY and HERBIE. His web series, INSPIRATIONAL THERAPY, earned him a great following on YouTube and many film festival selections. Ralph also focuses on writing feature-length screenplays and fiction. He has many upcoming novels and short stories on the way. Stay tuned for more updates!