You are here: Home / Mystery / Sweet As Murder 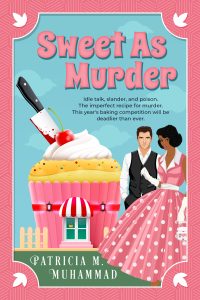 About Sweet As Murder

CONTENT WARNING: This book is a work of fiction. However, the author intended to create characters and settings historically accurate to the era it takes place during 1950s. Certain terms used as racial descriptions now considered archaic, outdated or even offensive are used to reflect the past usage by both black and white Americans of that era. Particular themes regarding race, references to certain crimes such as murder are included as part of the fictional plot. The author provides this content description for any potential reader who may consider any of these subject matters or references too sensitive to consider.

Wilhemina is a coloured detective in 1950s Atlanta, Georgia. She is married to Charles David Alexander Dankworth, an Anglo-Brit. Lieutenant Carmichael sends her and Detective Arthur Dobson undercover at the Society’s annual baking competition to investigate a murder committed at the preliminaries. Dankworth is no baker and finds a confectionary shop where she purchases her entry for each of the three-day competition. There is more at stake for than a blue ribbon prize. Idle talk, slander, and poison are the recipe for murder. Arthur is set as one of three judges. Dorothy, a veteran baker, is an associate of the Society and a contestant. On the first day of the baking competition, some of the participants notice a vagrant who is sits on the pavement outside of the Society’s grounds and observes people. Those who entered the baking competition years prior are accustomed to his presence though it still makes most of them uncomfortable. Arnold is stabbed. He is taken to the hospital where he encounters Dr. Francis Tate. His patient speaks in riddles. The doctor only seeks to treat him and have him heal. The excitement of the first day of the baking competition has just begun. Natalie introduces herself to Wilhemina. She too believes the competition is a possible stepping stone among the coloured elite. A baker named Delilah stands alone near a section of the refreshment table and gathers some sweets. Soon she falls to the wayside, dropping her edibles. Her death is ruled a homicide by poisoning. There is one oddity the coroner finds on her body, a black mark on her thumb. Later on it proves to be viable while still attached to this lifeless body. Arnold’s assigned nurse notices that he no ordinary patient. He is able to wield light and even control her movements just to taunt her. She does her best to placate him, bribing him with cookies if he behaves. No one knows exactly who this patient is, but soon the doctor realizes he is more important than he revealed. Arnold is not interested in tormenting the nurse too much. His focus is on who the Society will select this year as the winner of the baking competition. He gives impromptu directions as if he is speaking to someone not present. The doctor and nurse initially assess his behaviour as side effects of the sedative. It is not until Arnold calls upon Dr. Tate to complete a special assignment. He is confounded even after discreetly visiting the Society’s property during the competition. When he leaves he accidentally bumps into Charles who is to retrieve his wife at the end of the day’s competition. Wilhemina’s husband assumes that their encounter is happenstance. He notices a unique ring on the doctor’s finger. They engage in pleasantries and depart from one another. When he and Wilhemina reach the car, Charles notices that Francis is observing them. His wife reiterates how strange this baking competition and her cases are. During Arnold’s hospital stay, he receives a delivery from a neatly dressed man in a gray suit. He delivers a ring to the patient. Dorothy uses allegations of Communism to progress her way through the competition until she realizes that she has been socially disposed of by the Society. On day two her insidious verbal play instigates a fight between two bakers, Alice and Greta. Alice accuses Greta of being a Communist. Greta defends herself to the death and walks away unscathed. She believes she still has a chance to win the competition. Dankworth continues to notices consistent peculiar behaviour from one baker who plays with light. She appears to be in a trance sometimes, unaware of her surroundings. Marceline inclines towards listening through a door as if someone is communicating with her. The detective considers Marceline’s behaviour a result of nervousness caused by Delilah’s death. Natalie, Marceline and Wilhemina form a bond. Natalie is concerned about Marceline’s behaviour as well though she continues to be polite. Wilhemina learns of this light and is able to communicate with Charles while he is at work. She realizes that the method of death in her cases is atypical. Dorothy believes she is to return to the competition. Instead, she is met with two men at the threshold of her door. The detectives seem to be no closer to solving the case. Wilhemina leaves the grounds of the Society before the winner of the competition is announced. A confession is made. Charles meets with his wife and brings her home. They settle in for the evening until Wilhemina’s husband hears someone knocking at the door. A man dressed in a gray suit delivers a box for them. They have no idea what will happen next.

Patricia M. Muhammad is an American fiction author of crossover contemporary romance/science fiction, science fiction/fantasy, mystery and historical romance genres. She has currently written 22 novels. She is currently working on her next book manuscript. Before penning fiction, Patricia emerged as an international legal history scholar and academic author, focusing on human rights, international law and restorative justice. She has currently written and published a combination of 23 research papers and academic book reviews in these subject areas. Her work has appeared in the American University International Law Review, Columbia Journal of Race and Law, the Willamette Journal of International Law and Public Policy as well as the New York History Journal. Her non-fiction writing has been cited dozens of times in various respectable academic journals.