You are here: Home / Featured Books / Tapestry of My Mother’s Life by Malve von Hassell 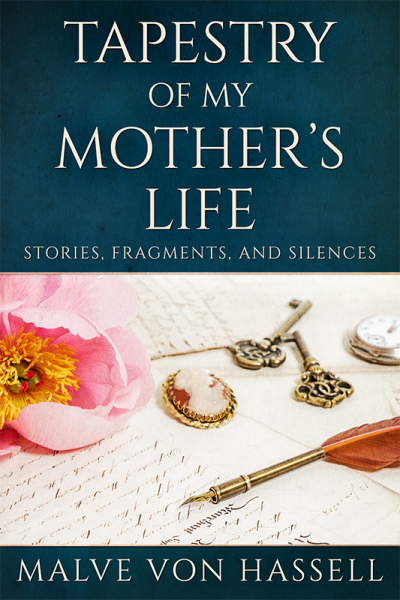 Tapestry of My Mother’s Life by Malve von Hassell

Tapestry of My Mother’s Life is a biographical account of a woman coming of age in Germany during the 1930s. Malve von Hassell explores her mother’s life through the fragmented lens of transmitted memory, and its impact on the second generation.

Born at her grandfather’s house in Farther Pomerania, 1923, Christa von Hassell had to contend with the increasing and pervasive impact of the Nazi regime. As the child of a German army officer, she moved with her parents often. Through boarding school, university, marriage, the Second World War, life under Soviet occupation, and a new beginning in the West that eventually took her to America, the biography is an emotional journey of childhood, survival, and relationships.

The portrayal of Christa’s life also focuses on the role of memory: shaped, distorted, and realigned in the continual process of telling stories of the past in conjunction with silence about many aspects. Children of women who shared similar experiences and life trajectories struggled with the challenge of learning about their parents’ lives during extraordinary times, confounded by a wealth of stories on the one hand and a seemingly impenetrable veil of silence on the other.

Working through such memorabilia, as well as the tales of the past, can offer ways in which one can come to terms with the inherited detritus of thoughts and memories. As such, this account of the life of a unique and complex individual has also wider relevance in that it addresses age-old questions of the relationship between one generation and the next.

Get This Non Fiction Book From Amazon.

Malve von Hassell is a freelance writer, researcher, and translator. She holds a Ph.D. in anthropology from the New School for Social Research. Working as an independent scholar, she published The Struggle for Eden: Community Gardens in New York City (Bergin & Garvey 2002) and Homesteading in New York City 1978-1993: The Divided Heart of Loisaida (Bergin & Garvey 1996). She has also edited her grandfather Ulrich von Hassell’s memoirs written in prison in 1944, Der Kreis schließt sich – Aufzeichnungen aus der Haft 1944 (Propylaen Verlag 1994). She has taught at Queens College, Baruch College, Pace University, and Suffolk County Community College, while continuing her work as a translator and writer. She has published two children’s picture books, Tooth Fairy (Amazon KDP 2012/2020), and Turtle Crossing (Amazon KDP 2021), and her translation and annotation of a German children’s classic by Tamara Ramsay, Rennefarre: Dott’s Wonderful Travels and Adventures (Two Harbors Press, 2012). The Falconer’s Apprentice (namelos, 2015) was her first historical fiction novel for young adults. She has published Alina: A Song for the Telling (BHC Press, 2020), set in Jerusalem in the time of the crusades, and The Amber Crane (Odyssey Books, 2021), set in Germany in 1645 and 1945, as well as a biographical work about a woman coming of age in Nazi Germany, Tapestry of My Mother’s Life: Stories, Fragments, and Silences (Next Chapter Publishing, 2021), and is working on a historical fiction trilogy featuring Adela of Normandy.