You are here: Home / Horror / Terminal (A bone-chilling tale of delirium and conceit) by TK. Watkins 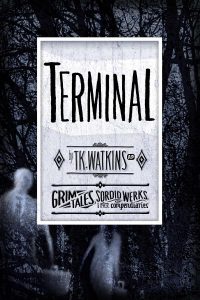 About Terminal (A bone-chilling tale of delirium and conceit) by TK. Watkins

Things aren’t what they seem.

What happens when a successful businessman’s identity is tampered with, leading to the risk of exposing a secret he’s been desperately trying to bury? Meet Patrick, a man who seems to have it all, yet faces the frightening possibility of throwing it away because of his own hubris and ignorance. How far will he go to protect his identity and keep his secret hidden?

He’s minutes away from boarding his flight and saying goodbye to his previous life as an overworked, privileged financial executive, but when Patrick Heliher is stopped at the gate and denied from boarding, his plans to start over come unraveled, setting up a series of bizarre and disturbing events that cut him off from the outside world and threaten to reveal a secret he’s been desperate to leave behind. Though mild-mannered and sophisticated on the surface, his ordeal exposes cracks in his personality, bringing out the worst in him as he sees his whole world collapsing before his eyes.

See how far Patrick goes to protect his identity while he cunningly schemes to get to his destination and shakes off his murky past. While things may not appear as they seem, Patrick fights to keep others from discovering the truth, only to be vanquished and humiliated in the end.

TERMINAL is a story of arrogance, paranoia, and malignant narcissism — in the face of a deeper reality few can bear to fathom.